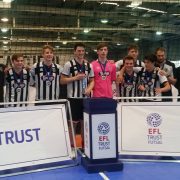 There were 16 teams in this year’s National Finals and it could be the most competitive one yet. Here is how the four groups of four panned out after the draw.

The Canaries have already made the final of the Kinder +Sport Challenge Cup earlier this season as well as comfortably winning South East League 1. The Norfolk outfit won with an eight-point margin after victory in 13 of their 14 regular season fixtures.

The Ewood Park outfit went to Birmingham Arena as North West League 1 Champions. They have also scored over 100 goals on their way to claiming the title. Rovers have gone one better than last year where they finished Runners Up in the league.

Boro qualified for National Finals as Runners Up in North East League 1. The Teesiders amassed 26 points from their 14 games including eight wins and a draw. The Smoggies are yet to win a title so this could be their chance.

The Blades secured their place at National Finals with a last day of the season win over local rivals Rotherham United. They edged Carlisle United out of the qualification places by a single point. United won eight and lost six of their 14 matches in the regular season.

The Robins had to wait until the last day of the season to clinch the title after avoiding defeat against second placed Cardiff City. Bristol topped the table on 37 points with 12 wins, a draw and one loss from their 14 games. They finished three clear at the summit.

The Potters finished their league campaign with a 13-3 win over Forest and it meant that they reached a total of 33 points. They won 10, drew three and lost twice on their way to capturing the title in North Midlands League 1.

The Stags qualified for the end of season showpiece by coming runners up North Midlands League 1. Town missed a chance to win the title on the final day with a loss to Derby County. Mansfield finished two points behind Stoke but comfortably qualified with an eight-point gap over third placed Derby County.

The Lilywhites made it to Birmingham Arena with a win on the last day of the season against Blackpool. They ousted Rochdale from the qualifying places on goal difference. North End finished 13 points off top and will be underdogs going into Nationals.

The Railwaymen have had a really strong season so far, reaching the league Cup Semi Finals as well as running away with the South Midlands League 1 title. Alex suffered defeat on just one occasion in the regular season and will be much fancied come Finals Day.

The Terriers go into the end of season showpiece as North West League 1 Runners Up, finishing behind Blackburn Rovers on goal difference, being pipped right at the end of the campaign.

The Bees progress to National Finals on the back of a second place finish in South East League 1. 10 wins from their 14 outings saw the West London side finish comfortably in the qualification places, 11 points ahead of fourth.

Posh secured the third and final National Finals place in the South East, five points ahead of Southampton. United won just over half of their games but it was enough for them to reach Birmingham.

The Mariners go into National Finals as many people’s favourites to go all the way. They are the Kinder +Sport Challenge Cup holders and went all season unbeaten.  Out of their 14 games Town managed to win 13 and gained one draw. They finished top of North East League 1 with a 14-point margin.

The Bluebirds came remarkably close to winning the title but missed out by drawing the last game of the campaign where a win would have seen them champions. Instead they progress to National Finals with a record of 11 wins, a draw and two defeats from their 14 fixtures this season.

The Shrews finished behind a strong Crewe outfit to qualify as Runners Up from South Midlands League 1. Salop played 15 games and only tasted defeat on three occasions. They also made Finals Day of the Kinder +Sport Challenge Cup and will be full of confidence.

The Exiles booked their place at Birmingham with a third place finish in South West League 1. In a highly competitive league County hit a run of form at the right time to finish ahead of the likes of Plymouth Argyle. Newport ended on 30 points, winning 10 of their 14 games.