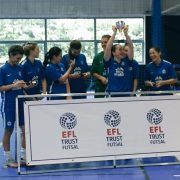 The National Ladies Finals of the EFL Trust Futsal League came to a head this month with six teams from around the country travelling to the new Play Football Futsal Arena in Birmingham.

The season has taken it’s toll on some of the teams with some teams dropping out due to injuries but the teams that turned up to a wet and windy Futsal Arena were raring to go for the finals.

Of the six teams competing were League Champions and strong favourites Peterborough United Ladies who were looking to complete a league and Cup double, the team was presented with the League trophy prior to the matches today.

Three matches in each group and we were under way and The Posh got off to a great start with a 3 – 0 win over Bristol City Ladies, while in Group B another strong team Southampton Ladies clinched a 1 – 0 win over Shrewsbury Town Ladies.

In the next round of fixtures Cardiff City got the best possible start with a 4 – 1 win over The Shrews and Burton Albion also started well with a 3 – 1 win over Bristol City Ladies.

The final group matches saw Peterborough comfortably beat Burton Albion 5 – 1 while it was a tighter affair with Southampton and Cardiff City who were both in with a chance of qualifying for he final, Cardiff City came out winners with a 2 – 0 win.

To the Final between Peterborough and Cardiff and both teams started well with chances for both but it was Peterborough who scored first and by half time made it 2 – 0, a brave fight in the second half saw The Bluebirds score two goals themselves but it was after Peterborough has already added two more so too little too late as The Posh won 4 – 2 to complete the League and National Finals double.

Well done to all the teams and coaches who attended today with some great Futsal from every team, a big thank you to the venue and also the referee’s who kept the matches flowing throughout the day.