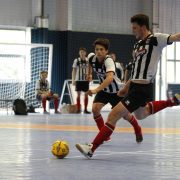 Grimsby Town Futsal continued their dominance on Youth National Futsal by achieving their 2nd Treble in in 3 years. Grimsby Town Futsal rounded off a magnificent season by completing an epic treble of silverware after been crowned EFL Trust L1 National Futsal Trophy Champions just like the 2013/14 team. Even more incredibly the triumph meant they went unbeaten in all competitions throughout the whole of the 2015/16 campaign.

The Mariners had already won the EFL North East League 1 and the National KinderPlus Sport Cup earlier in the year when they joined all the other Regional League Champions and Runners-up for a National Finals day in Birmingham on June 15th.  If Town were to be successful they would have to qualify in the top 2 from a group of 4 and then win the quarter finals, semi-finals and final all in the same day.

In Grimsby’s group was Cardiff, Shrewsbury Town and Newport County. In the opening game Town overcame Cardiff 3-1 a couple of goals from Jack Boswell and Liam Hulse got the black and whites off to a great start. Grimsby wrapped up qualification in the second game coming from behind to beat Shrewsbury Town 5-2 with Blunden and Williamson getting in on the scoring. This set up a battle for first place against Newport County in the final group game, who were also on 6 points but had 1 goal more than the Mariners. Grimsby had the game wrapped up by half time at 4-0 in their best attacking performance so far. They added 2 more through De-Gruchy and Taylor in the second half to take the score line to 6-0 and put Grimsby Town through as group winners.

Grimsby faced Brentford in the quarter finals, who were South East League Runners up. In what proved to be Grimsby’s toughest test they found themselves level at full time, a Jack Boswell spot kick meant the scores finished 1-1 at set up a penalty shootout. Jack Gibbons was the hero saving 2 spots kicks and that ensured Town would be in the semi-final. Grimsby met Blackburn Rovers in the semi-final and quickly raced into a 3 goal lead going into the interval. Blackburn pulled one back straight after the turnaround but Callum De-Gruchy made it 4-1 and booked Town’s place in the final.

In a nervy first half Jack Boswell’s thumping free kick separated the sides as the half time buzzer rang. Norwich should have levelled after the break but Jack Gibbons made a tremendous save. Town capitalised on the missed chance and De-Gruchy doubled their lead. The icing on the cake came from captain Blunden coverting a penalty to make it 3-0 and a comfortable final 5 minutes for Grimsby.

As the full time whistle sounded everyone around showed their appreciation for this unprecedented achievement and a clean sweep of all trophies on offer this year.