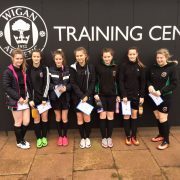 The pupils will represent Wigan Athletic at the Area Finals of the Kinder + Sport EFL Girls Cup tomorrow, a national tournament for junior footballers which offers children a once in a lifetime opportunity to play at Wembley Stadium before the Checkatrade Trophy.

Golborne High School were victorious against Hawkley Hall in the 18 team local competition at Wigan Soccerdome at the start of November, and they will now travel to Preston North End’s Community Training Centre, Play Football, for the next stage of the competition tomorrow.

The Kinder + Sport EFL Girls Cup is a six a side competition for U13 girls which culminates in a grand final prior to the EFL Trophy Final at Wembley Stadium in March. Each of the 72 EFL clubs organise a local competition for all schools in their area, with the winners of that competition going on to represent the club in the Area, Regional and National phases of the competition. John Woods, P.E Teacher at Golborne High School, said: “The girls and ourselves as staff had a fantastic time with Wigan Athletic. The visit to the training ground was a brilliant insight into the daily routine of a footballer while the training session with Jay was great preparation for the girls as they managed to improve on a few things ahead of Thursday’s competition.

He added: “We really appreciate everything the club do for us. We’ve got a fantastic link with Wigan Athletic Community Trust, and it’s not all just about football because we’ve got coaches coming in to do sports such as badminton and basketball as well, so it’s a really fabulous relationship.”

The girls, who were the first school to visit Latics’ new training centre in Euxton, met the club’s first team players who signed autographs before their training session. Steph Greensill, Girls Football Officer for Wigan Athletic Community Trust, said: “We know Golborne will represent the club well in the area finals, and we hope they can continue their run for form into the next stage.

She added: “We deliver 12 sessions of girls’ football a week, and have seen a significant rise in the number of females who attend. Tournaments such as the Kinder + Sport EFL Girls Cup help to get more girls involved in the game and are a great way for them to showcase their talents on national level.”