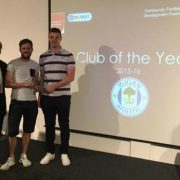 Wigan Athletic Community Trust took home all of the spoils at the recent USW Foundation Degree in Football Coaching & Development awards evening. Along with the big awards, the outstanding students from each club involved in the foundation degree were awarded for their hard work, as the programme celebrated another successful year.

As well as being named Club of the Year for the second year in a row, two members of the Community Trust’s teams were highlighted for their individual work on the course; Chris Baxter as Student of the Year and Adam Sherratt as Club Mentor of the Year. 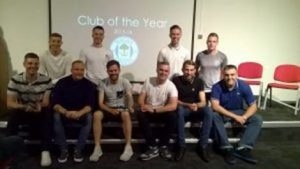 Six coaches from Wigan Athletic Community Trust have spent the last twelve months studying year one of their degree, with nine completing their second year and one completing his third, whilst they all also worked and volunteered as sports coaches for the Community Trust.

Tom Flower, Head of Community at Wigan Athletic Community Trust said: “We are extremely proud of the hard work that everyone involved with the University of South Wales degree has put in this year and to be acknowledged by receiving these three awards highlights their achievements.”

“Not only have the coaches successfully completed year one of their degree, they have all continued to deliver high quality coaching throughout the year across a number of our projects.”

Adam Sherratt, Education Officer for the Trust, said: “When we won Club of the Year last year, I said that we wanted to continue the good work with our second set of students; to receive three awards is a real credit to the effort put in by everyone involved with the course.”

Jay Probert, course leader for the foundation degree at USW added: “We have been really impressed again with how the students have performed on this programme all across the country, with Wigan Athletic again setting the standards in how they support their students to achieve in their academic studies and also in their work based learning”

The foundation degree is delivered by the University of South Wales in partnership with EFL Trust, with students combing their Higher Education with work placements at 32 EFL clubs.

To find out more about the University of South Wales foundation degree, please click here.