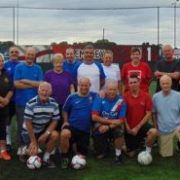 Prolific striker in his heyday, Laurie Sheffield notched an impressive 34 goals in just 58 games during his first of two spells at Doncaster Rovers – way back in 1965. Just last week, the 77 year old bagged himself a hat-trick in the same neck of the woods.

Laurie still gets to kick a ball about three times a week in his beloved Rovers shirt through the Walking Football programme, which was established by Club Doncaster Foundation last year.

The project is targeted at adults who are less active but still have a love and passion for football and allows both men and women to participate in the walking format of the game.

Perfect for former Rovers and Newport County AFC forward, Laurie who fittingly celebrated his return to the game at the Keepmoat Stadium on Saturday during the interval of the clash between the two sides.

“At first I thought, walking football! Is that a really a thing? But I’ve been involved for 12 months now and I’ve loved every minute.” He said. “There’s no substitute for actually being on the pitch and I can play the game I love again.”

“It releases you. When you come down here, every other problem in your life goes away.”

“For example, my wife is poorly and as much as you’ve got to get your priorities right and I’ll always look after her, sometimes we’re on each other’s backs so it’s good for both of us for me to release a bit of tension away on the pitch.”

Since its establishment, the project has completely blossomed and the initial target of 20 players has been well surpassed with 64 participants at regular sessions.

Jan Milner who been instrumental to this success explains the importance of the programme. “Walking football breaks barriers.” She said. “People often think they can’t do it but as soon as they get here they realise that actually, they are capable and it will change their life.”

“The beauty of it is that is has everything that football offers, the exercise, the competition, even down to the banter and the social aspects. It gives people the opportunity to not only re-live their footballing memories but also create new ones.”

As well as the sessions, Jan has also organised an open evening to host activities, a quiz and a ‘trip down memory lane’ on the 6th of October, which will hopefully also become a regular thing to allow an alternative to training over the winter months.

Tweets by @FL_Trust
A Gold Medal for NCS Teens