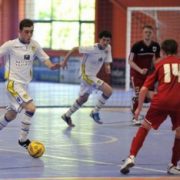 Joe Kenny is an England International, degree student, and a great example of how the EFL Trust Futsal programme can make a difference to people’s lives.

Joe was released by Leeds United aged 15 and in his own words ‘just mucked about at school.’ He now has 7 England Futsal caps to his name, is one of the rising stars of the game and is currently studying for a degree at Loughborough University. However, as he explains not too many years ago it appeared his life was heading in a different direction.

“I’d been with the Leeds United Academy since I was 9. At 15 I was released and it was devastating at the time.  I’m a Leeds fan and I was living the dream but it just didn’t work out.  What made things worse was that I’d just messed about a bit at school and didn’t get the grades. Basically school did not feel relevant to me. I’m into football, I love playing and sitting in the school classroom I wasn’t particularly motivated and I as a result just didn’t do that well.  So my qualifications aren’t great and my football dreams are seem like they are over and I was just left wondering what on earth do I do next.”

“Then I saw the EFL Trust Futsal and Education Programme which offered me a lifeline. It meant I could still continue to play and represent Leeds, Importantly the course would give me a qualification, a BTEC in Sport and Active Leisure, which could open up a path into further education or employment.”

“The EFL Trust Futsal programme was great for me. It’s different from school and I just felt motivated to learn. You’re studying at a professional football club, the one I’d supported since I was a toddler.  You learn using an online platform but you’ve got lots of support. Then of course you get to pull on that club shirt and represent your team against other professional clubs.  For me it opened up a path into the higher levels of Futsal, regional development squads, England Under 19’s, Under 23’s and finally into the full England Team.  If you said to the 15 year old me that I’d end up going to university, he would have laughed at you. Yet only a few years later I’m studying at a top university and I’ve represented my country.”

Mark Dick the EFL Trust, Futsal Manager, comments, “The course is ideal for people like Joe, who love sport and aren’t particularly motivated by the academic environment and as such didn’t do too well at school. By using sport as a focal point it’s provides a way to ignite a passion for learning. Many students then go onto university or straight into employment. That’s the main focus of the programme, however an ever increasing number of our students are finding their way into the regional development squads and more are likely to following Joe’s footsteps and play for the national team.”