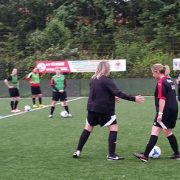 Two ladies from Crawley who’ve stood on the side lines for years have just qualified as FA level One coaches.

Carol Bates and Maria Iula Harris are from a generation of women that missed the female football revolution but thanks to the EFL Trust FFD programme they’ve taken up the sport later in life. They were introduced to football by Crawley Town’s COGS (Crawley Old Girls Initiative), which was developed specifically for older ladies, who have an interest and passion for football, but who may not have had the opportunity to participate before. In addition, the ladies have used their newly developed skills recently to help deliver a session to the rest of the COGS ladies, supporting grassroots football.

Nicol Mererdith from the EFL Trust commented: “It’s really fantastic that the COGS ladies have had this opportunity. Our FFD programme has certainly been a catalyst for women now taking the level 1 award. It’s evident that this will further develop the workforce, and create role models for future generations”.

Participant Carol Bates: “It was great to have the opportunity to take the FA Level 1 coaching course locally, at Crawley Town FC. As a local youth Club Secretary I usually only get involved with all the paperwork but it certainly gave me a good insight into how much work coaches put in when they coach our children. Having been on the sidelines as a parent for over 10 years it gave me a much greater understanding of planning sessions and what goes into running them. It’s given me a great deal of information to take on board and now I’m helping run a new U11s girls’ team, for our club Crawley United, I’ll be putting it into practice too!”

Maria Iula Harris commented: “I joined COGS just over a year ago for a bit of fun with some friends. Little did I realise that Thursday nights would become my favourite night of the week where I would get to don my football boots! Then, after only a year, I as so inspired that I decided to become a Level 1 football coach, which I passed successfully. I will be looking to start an U8 girls football team in September. I thank my lucky stars that I was given the opportunity to join a team like COGS and now I ill hopefully be inspiring young girls to take up the great game of football.”

The grant of £2000 from Crawley Town FC and the FA Community Shield Fund, allowed six young people as part of the Crawley Town Scholarship Fund to complete the FA Level 1 Award in Coaching at the Checkatrade.com Stadium. Delivered by Sussex County FA, attendees worked on various different modules to prepare them for coaching activity with the Community Foundation.

Tweets by @FL_Trust
From Rejection to International Honours