News
You are here: Home1 / News2 / News3 / 4homepage4 / Proud Terriers Goes From Strength To Strength Ahead Of Huddersfield Town’s... 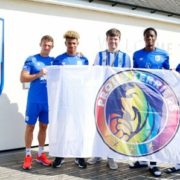 “I really want to help in the fight to eradicate homophobia from football,” says Ryan Mather. In 2020, we gave our platform to Ryan a life-long Huddersfield Town fan and very ‘Proud Terrier’ to tell his story in his own words. At the time Ryan was also a first-year student on the University of South Wales and EFL Trust Foundation Degree in Community Football Coaching and Development with Huddersfield Town Foundation.

Ryan has since progressed having completed his Foundation Degree earlier this year and is now in the process of completing the Top Up Degree.

Ryan explains how proud Terriers came about, “A few years back at a Huddersfield Town vs Brighton game, which was our Rainbow Laces fixture, there was homophobic chanting from the Town end to the Brighton fans. This was the most uncomfortable I have ever felt at a game and this incident left me feeling upset, angry, and so disappointed. Being made to feel like this has led to me having several panic attacks and has impacted my mental health. If I’m feeling this, then others within our community will feel the same. “

“I made it my mission ultimately to create a culture of inclusion in football and develop more of an accepting atmosphere throughout the ground and the community. My starting point was to create a real identity for the group and came up with ‘Proud Terriers’. I started with a logo and then created a Twitter page for the group. At the time I already knew someone at the Football Club and so I reached out to him to tell him about my ideas and to see how he could support us and the Club have been really supportive.”

There has also been support from Huddersfield Town Club legend, Andy Booth who has become a Proud Terriers ambassador. This has seen the initiative grow from strength to strength. Andy works within the supporter’s services and is the frontman of getting ideas off the ground from appearing in the club programme, to meeting players.

Ryan said: “He’s been a really incredible ally to us and one I will always be grateful for to have someone I looked up to growing up when he played for the club is surreal.”

This has enabled Proud Terriers to be a connecting partner with many local colleges and Huddersfield Town Women which has continued to enhance the football is for everyone messaging to a wider, diverse audience.

More so, social media has been powerful in Ryan’s upwards trajectory with his Instagram and Twitter followers doubling since their creation in 2020. Consequently, Proud Terriers now has its own merchandise available with Ryan and his team handing out laces, badges and leaflets at Huddersfield Towns dedicated Rainbow Laces fixture against Millwall on Saturday 29th October.

“I am a big Huddersfield Town fan and I have been all my life. I am an openly gay football fan and I’ve witnessed homophobia and really wanted to establish a movement to inspire a new generation of fans and create a culture in which homophobia doesn’t exist. There still is a way to go but with Proud Terriers we’ve made a great start of the journey.”