News
You are here: Home1 / News2 / News3 / 4homepage4 / PNCET and Guild Lodge partnership has given ex-service user John a new... 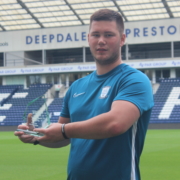 John Richardson has progressed from a user of Preston North End’s Community and Education Trust’s partnership with Guild Lodge to giving back to the community and creating a better future for himself.

John was a patient at Guild Lodge, a mental health unit in Goosnargh, Preston when Tom Drake, the Trust’s CEO, visited to deliver weekly sessions to the service users. This meeting was the start of a whole new future for John having been in Guild Lodge for three and a half years.

The partnership between Guild Lodge and PNECET meant Tom quickly noticed John’s nature of engagement and willingness towards other participants. Consequently, John was offered the opportunity to volunteer within the Trust. Having been discharged from Guild Lodge, John began his evolving journey with Preston as he started as a volunteer and now a casual member of staff where he has gained paid employment working across the Community Engagement and Health and Wellbeing programmes.

John has also actively been involved in the Trust’s holiday activities and food programme, soccer schools as well as delivering PL Kicks sessions to younger generations of the community and has also engaged with men’s mental health group, Andy’s Man Club.

He explained:  “When I was at Guild Lodge, Tom Drake [PNECET CEO] came down and introduced himself and gave me some training. He later offered me a job. Now I’m a member of staff and I’m going back into Guild Lodge to help what Tom started.

“It’s helped me mature. It’s something I enjoy, which is a bonus. I’m doing it for myself, getting more confident, and helping children back on to the straight and narrow.”

John’s desire to serve the community that helped him has gained significant recognition as he was awarded Preston’s Community Gateway Association ‘Unsung Hero’ award.

He said: “I’ve been giving back to the community, that’s what I wanted to do. I’ve been helping other people get out of trouble, giving talks to young people and getting them off the wrong path and getting them onto the right path. I’m just enjoying my job.”