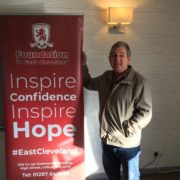 Stephen McNeil first attended Ayresome Park in 1967 with his dad and has been a Middlesbrough fan ever since. However, at this first outing, it was yet to be known how powerful the Boro badge would be for Stephen.

Stephen was on his own, and his life had spiralled out of control when he had a complete mental breakdown with emptiness and a lack of purpose.

“I’d gone, I couldn’t speak, couldn’t walk, nothing made sense,” he openly admits.

“I think I was put in a padded cell and visited by people trying to figure out what to do, how to help.

“I had no contact with friends or family, I was on my own and in a dark place,” he openly admits. “I had no-one to talk to, no sense of perspective, I didn’t know what to do anymore.”

Then the red of the Boro badge ignited a spark inside Stephen after noticing a poster advertising a trip to Ayresome Park, the place Stephen loved, where his lifelong club had created so many memories for him.

He explains: “ [The badge] helped me remember there was something in life that I wanted to do, there was no trip, it was a placebo and it worked, I had shown there was still something inside me and was allowed to go.”

Stephen owns two dogs but has little else in the way of company but once again the association with red and Boro changed his circumstances once more. He saw a Middlesbrough Foundation poster advertising a range of programmes hosted by the Foundation; Team Talk mental health session, Walk and Talk and Walking Football.

Stephen got involved in all three programmes. He said: “The power of the badge, the colour, that distinctive red and the work of the Foundation. All this has helped me massively.”

Middlesbrough and their Foundation have created a whole new pathway for Stephen powered from hope, support and inclusion.

Tweets by @FL_Trust
PNCET and Guild Lodge partnership has given ex-service user John a new future...