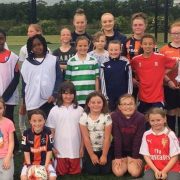 Buoyed by watching England’s last-gasp win over Wales in the afternoon, 30 local schoolgirls were quick to escape their living rooms and lace up their boots to show their skills at Stockwood Park Academy in Luton for an hour between 7-8pm.

Last night was the first of a free six-week open training programme for girls currently in school years 3 up to school year 10, and Hatch was thrilled to see the new initiative – which offers the same PDC opportunity as previously only available to boys – kick-off in style.

“I was really pleased to see so many local girls turn up,” said Hatch. “We had 30 last night, which was impressive because after the England-Wales game, some families may have carried on the party and forgotten about our first session.

“As it turned out, the euphoria at the end of the game inspired so many girls to get out on a pitch and enjoy trying to recreate the action in Luton, which is wonderful.

“We’ve had lots more register for next week after seeing the pictures on social media and reading about it on the club website, so we are hopeful that our first dedicated PDC for girls will prove a huge success.”

The opening of the new centre follows on from our successful involvement in the EFL Trust and FA’s Female Football Development Plan to grow the female game.

Initially, the PDC will aim to:

The two main objectives of the PDC will be to initially establish four training squads for Under9/10; U11/12; U13/14 and U15/16 and then to eventually provide elite pathways for girls aged 16+ to Luton Town Ladies’ first team and development squads.

Girls currently playing for a local club who are offered a place at the PDC can remain with their local clubs as games for Luton Town FC against other professional club female development squads take place in the school holidays to avoid clashing with weekend club fixtures. Girls not currently playing for a club or who have never played for a club are also more than welcome as there are plans for future playing opportunities with the Ladies’ junior section.

The six-week trial will run every Thursday evening until July 21st at Stockwood Park Academy in Rotherham Avenue, Luton, from 7-8pm.

If you want to attend a free open sessions during June and July, you can apply for a place by emailing the Community Department at the Club on LTYD@lutontown.co.uk