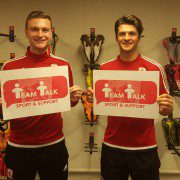 Middlesbrough players have made a significant contribution towards a new scheme which is being launched to support Teesside men who have lost their jobs.

A number of the club’s first team squad posed topless for a charity calendar at the end of last year after pledging their desire to raise funds for a community project following the loss of over 1,000 jobs in the area.

Head of Middlesbrough Football Club Foundation Helena Bowman: “Our programmes have a proven record of improving the lives of Teesside people and we’re delighted to be able to deliver the Team Talk project. We would like to thank the players and all of the funding partners for giving us the opportunity to reach out to those in our region who are facing the challenges of unemployment.”

The £40,000 ‘Team Talk’ project, which is being backed by the Boro players, will target males aged 40 and over who have recently been made redundant, particularly in the areas most affected by the closure of Redcar’s SSI steelworks.

Cllr Mick Thompson, Middlesbrough Council’s Executive Member for Communities and Public Health: “Ever since the closure of SSI, Middlesbrough Football Club and its players have shown solidarity with the workers and the people of Teesside and supported the community every step of the way. “I’m pleased to see the money raised being used to fund Team Talk – sport is a great way of connecting with people – and that Middlesbrough Council and Redcar & Cleveland Borough Council are also using our resources to help people in the area affected by redundancy.”

The project has already received financial backing from Middlesbrough Council and Redcar and Cleveland Borough Council, as well as Public Health England and North of England Mental Health Development Unit (NEMHDU), and is further bolstered by £12,000 of investment – the proceeds from the hugely popular topless calendar.
Team Talk will consist of ‘sport and support’ sessions, utilising the Boro brand to tackle the many challenges faced by those who have been made unemployed.

Delivered by MFC Foundation, the official charitable arm of Middlesbrough Football Club, the project will be rolled out in five venues, or ‘boot rooms’ in Middlesbrough and the surrounding areas.

Boro’s players are set to have a continued involvement in the project, including at Team Talk’s launch event on April 26. Middlesbrough player George Friend commented: “Team Talk is a project which I hope will make a big difference to many people’s lives. The region is in real need of help and emotional support during what is a hard time, particularly after the decline of the steel industry. I’m positive that the Team Talk project will be able to aid those in need and show that the spirit of Teesside is alive and strong.”