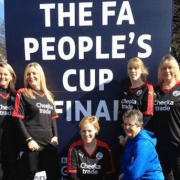 On Sunday 20th March, the Crawley COGS descended on Sheffield for the FA People’s Cup final. With two teams entered under the female veterans category, the COGS were placed in a group with four other vets teams from across the country. The first match of the day saw the two COGS teams pitched against each other in a nervous encounter. COGS 2 were the eventual winners, running out 2-1 winners against their peers.

The course of the day saw both teams compete in 10 minute matches against: Football Unites, Racism Divides, N16FC, Hackney Jurassics and the Wolfies. Despite a heroic effort by both COGS teams, it was FURD and Hackney Jurassics who made it to the overall final, with the latter securing the overall bragging rights with a 4-0 victory. Despite the results, the COGS had a fantastic day. All games were played in very good spirits, with all teams supportive of each other. Following the games, contact details were exchanged by all teams, with the view of running a summer tournament. All teams have also pledged to do their bit to get more teams involved next year!

Carol Bates is one of the original members of COGS, and has been influential in the success of the programme. She says: “This time last year the COGs (Crawley Old Girls) was just a dream. Since then, we have formed a large group of older ladies for a kickabout on a Thursday night and the COGs have now gone from strength to strength, with the coaching delivered by the Community Foundation.  It really has changed the lives of some of our ‘Old Girls’.”

Amy Fazackerley, FFD lead says: “The ladies should be incredibly proud of what they have achieved over the past year. Their commitment to raising the profile of ‘older’ ladies football has been fantastic. They are so passionate about getting others into the sport and have worked tirelessly to promote and inspire others. To get to a national final less than a year after first kicking a ball is an incredible achievement. In terms of the day itself, it was brilliant to see the teams interacting with each other. It was a day full of laughter, with some new friendships developed on the way too”.

Crawley Town FC and Crawley Town Community Foundation are delighted at this fantastic achievement. In just under a year, the group have gone from never kicking a ball to a national final, and have inspired many along the way. The aim now is to get more older ladies involved.