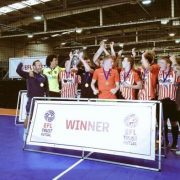 The fifth and final National Finals Day at the International Futsal Arena in Birmingham took place on Thursday with ten teams split in to two groups all playing four matches in a round robin to advance to the semi-finals.

In Group A Southampton won all four matches and only conceded 2 goals to finish top on 12 points, they were followed closely behind by Bristol City who finished on 9 points, their only loss to the Saints. Mansfield Town finished in third with 6 points while Sheffield United and Preston North End both finished on 1 point respectively.

In Group B the final placing came down to the final round of matches with Grimsby Town topping the group on 9 points having lost their only match narrowly to Sheffield United , in second place Exeter City and Plymouth Argyle both finished on 7 points but in was Exeter who had the better goal difference to book their place in the semis. In fourth place were Sheffield United on 4 points and Chelsea finished fifth on 1 point.

Down to the Semi Finals and The Grecians played the in form Southampton but City produced some great attacking futsal to win the match 3-0, in the second semi final Grimsby Town who were coming in to form at the right time on the day beat Bristol City 3-2.

In to the final and the first goal went to Exeter City with a great move finished in style, they held the lead for 10 minutes before Grimsby Town equalized with 7 minutes remaining. Three minutes from time and it was all still square until City scored with 2 minutes left on the clock. It proved to be the winner after great defending and some outstanding saves from the Grecians keeper in the last minutes of play.

Another great day of finals, thank you to all the players, coaches and referees for some great Futsal.