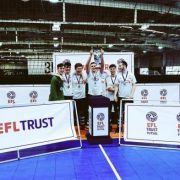 Another day of quality Futsal came to Birmingham International Arena today for the League 3 National Finals 2016, another 16 teams were split in to four groups and would play three group matches each before the knockout stages.

In Group A Bristol City were unbeaten winning every game by one goal to progress with 9 points, in second was Southampton who finished on 4 points the same as Blackpool but the Saints progressed by virtue of goal difference; Newport County finished fourth on 0 points.

In Group C the other Canaries side finished unbeaten and topped the group on 9 points. In second place was another tie on points with Portmouth and Southampton finishing on 4 points respectively but it was Pompey who had the superior goal difference and progressed to the quarter finals. In fourth place were Bradford City on 0 points.

In Group D, the top spot was tied on 7 points with Scunthorpe United finishing above Grimsby Town on goal difference, in third place was Bristol City on 3 points and Hull City on 0 points.

To the quarter finals and the best 8 teams of the day would battle it out. In the first quarter final Exeter overcame Bristol, Norwich City had their revenge on Grimsby Town who until today had done the treble over the Carrow Road outfit, beating them for a place in the semis. In the bottom half of the draw Preston North End beat Southampton and Scunny beat Portsmouth.

In the semi finals Norwich City continued their good form in the finals beating Exeter City 3 – 2, The Lilywhites also remained unbeaten winning 3 – 0 against Scunthorpe to set up a great final.

The final between the best two teams of the day and it didn’t disappoint with both teams on the attack from the first whistle, it was Preston North End who scored first and it stayed 1 – 0 until for the rest of the match with a great display from their defence and keeper to keep the clean sheet.

Preston North End were Champions and fully deserved, a great day of Futsal from all the players, coaches, staff and of course the referees, well done everyone.