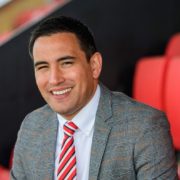 The EFL Trust, the charitable arm of the EFL, is today delighted to announce that Liam Scully – Chief Executive of Lincoln City and Trustee of the Lincoln City Foundation – is to become its new Chair, officially taking up the role in September 2021.

The appointment follows the current EFL Trust Chair, John Nixon, stepping down from his role after a successful and memorable 10-year spell. John will be succeeded by Liam, following an extensive and comprehensive recruitment process, headed up by EFL Trust Senior Independent Trustee Charlotte Hill OBE, with support from EFL Trust Independent Trustee Roger Davidson, EFL Trust and EFL Board member Debbie Jevans, CBE and Sanjay Bhandari, Chair of Kick it Out.

A number of impressive candidates from the football industry, private, public and charitable sectors were interviewed and the decision to appoint Liam was approved by the EFL Trust Board and ratified by the Board of the EFL.

Liam will be joining the EFL Trust at an important period in its history, as the EFL Trust seeks to continue its work with the network of Club Community Organisations (CCOs), funding partners and Governmental departments, to create 72 stronger, healthier, more active communities in England and Wales as they emerge from the COVID crisis.

Having started his career on the community side of the football industry, Liam’s experience includes roles at the Club Doncaster Foundation, Doncaster Rovers Football Club and the Asian Sports Foundation. He is well placed to understand the vital role football plays in the community and amongst the charitable sector, alongside the symbiotic relationship required between a Club and its CCO.

“It is a tremendous honour to be taking over from John Nixon, who has done such a fantastic job over the past ten years. The responsibility of leading the EFL Trust during such a critical time for our communities is certainly a challenge. By collaborating with the EFL Trust and EFL Board members and Executive, along with all 72 EFL Clubs and CCOs, I’m confident we can play a pivotal role to help build stronger communities through our collective influence and reach.”

“Liam’s wealth of experience both in the football and community sectors is something that really stood out during our discussions. Liam is an established leader, holding Senior Executive and Non-Executive positions, and has an extensive understanding, as well as being incredibly passionate about the role football Clubs and their CCOs play in their local communities. I know he will bring energy, enthusiasm and real credibility to the role – though he has big shoes to fill after a phenomenal 10 years as Chair from John Nixon. This is an exciting time for EFL Trust. Football Clubs have played an incredibly significant role in their communities during the pandemic, and we have much work to do as we support communities to come out the other side of this challenging time.”

“I would like to firstly thank John Nixon for his hugely impressive and impactful 10 years at the helm of the EFL Trust. John’s influence has seen the Trust and CCO network grow exponentially over this period, and he leaves a legacy of positively impacting hundreds of thousands of people’s lives.

“The EFL Board believes Liam has the knowledge, skills and desire to continue this work and I personally look forward to working alongside him as we seek strengthen our links with our communities.”

Young people on NCS create sensory garden and raise much needed funds for local...
Scroll to top
This website uses cookies to improve your experience by allowing the website to recognise you on subsequent visits and make navigation quicker,. We do not collect any personal data or share data with third parties. Press accept to opt-in to use of cookies on this site.Accept Reject Read More
Privacy & Cookies Policy