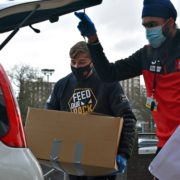 A group of  students studying our USW Foundation degree with Wolverhampton Wanderers have been part of the big team effort in supporting the Clubs Feed Our Pack initiative to try and help alleviate food poverty in their city.

Jeevan Kang, Richard Lewis, Taylor Sankey, Sofi Makarounas and Louis Guttridge spent a day during February half term as part of Feed Our Pack’s first major distribution of food parcels with over 1,500 meals delivered to families across the local community. The five students joined Foundation staff as well as Wolves captain Conor Coady and several Academy Under-18 players in what will prove valuable experience in studying for the degree in conjunction with the University of South Wales.

“As a student at Wolves Foundation I had the opportunity to join in and get involved and it was a really good experience. It was a really good day for a really good cause, helping children within the community who are struggling in terms of finance and food. I think as a human being the best thing you can do is give rather than take – the vulnerable need it more than we do. And it’s just that feeling you get again with giving, it’s just the best feeling you can have.”

Richard was equally positive about being able to do something to make a positive difference to the local community.

“I was brought up in Wolverhampton, and when I was at school this wasn’t around when my friends needed it, so being able to see that aspect is something I’m proud to be part of, We went out to deliver food parcels to the local children who are vulnerable and need it more during this time than they ever would with their parents not being able to get to work as much. Despite going through these troubled times, we’re still able to get some experience. With the Feed Our Pack project, going out and helping out the local community, is still giving us that aspect of learning and how things are run behind the scenes.”

Bradley Moore, Education Officer and course mentor at Wolves Foundation, was delighted that the students were able to play their part in such an important project.

“It was great to see the degree students so keen to help with Feed Our Pack and they were all a credit both to themselves and the course. The degree course is based around blended learning which means the lectures that would normally take place at Molineux are balanced with going out and gaining experience at the same time. That experience might include coaching, taking PE sessions at schools, learning sports management skills, or making a major contribution to other Foundation projects just like Feed Our Pack. It is almost like picking up three years of work experience at the same time of learning via lectures, and as a result the employability rate is really good for students to go into different jobs within football or sport education after they graduate.”

The degree in Football Coaching, Development and Administration is run in partnership with the EFL Trust and the University of South Wales, with large parts of the students’ timetables based at Molineux, along with work placements within the Foundation.

“This degree has a really good track record of getting people into full time roles within football and the sporting industry, And studying at Wolves is the best thing you could possibly think of. “You are studying the thing you love, which is football, but it is at a professional football club. So you know that you’re going to get the best support possible and you’re going to interact with the best coaches possible too. And the good thing about this course is, it’s not just straight on lectures and studying. “It’s basically three years of work experience which will really help you further progress into your career.”

Richard admits that even with certain restrictions in place because of the pandemic, the degree has functioned excellently and given students plenty of learning opportunities.

“It was quite worrying at the start, thinking that we would only be doing our lectures. But we have been able to get out there and challenge ourselves as students to see that we can go out and do good things in the community and show how we are as people and what we can do. That’s what makes this course stand out is the fact we can get a huge amount of experience by being part of the club!”

Anyone interested in finding out more about the Foundation’s degree course can register an interest by clicking here to complete and submitting an Expression of Interest form.