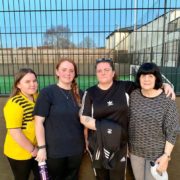 Four generations of women from one family are getting involved in football, thanks to Bristol City Robins Foundation’s innovative ‘F3’ project.

A lack of opportunity for girls to get involved in football was identified by three teenage members of the Robins Foundation’s Youth Council – a body of eight young people who use their in-depth knowledge of the local community to help shape the Foundation’s delivery. Youth Councilors, Lauren, Grace and Mel, came up with the idea of starting free football sessions specifically designed for women and girls, as a means to make the beautiful game more accessible to females. The trio wanted to ensure that the project was accessible to all and therefore setup three separate age specific sessions for females to attend, all of which take place simultaneously at the same venue.

The project has had a particular impact on one family with four generations of women – that’s daughter, mother, grandmother and great grandmother! – all regularly in attendance at the weekly sessions.

Ruby-Lee, the youngest of the four generations at 14 years old, was the first to start attending Free Female Fitness sessions (otherwise known as F3) four years ago. Ruby-Lee was one of the first participants to attend and has since flourished as a footballer, becoming more confident in not only her ability as a player but also in herself as an individual. She now not only takes part in the weekly sessions, but also plays for local girls’ team Stockwood Wanderers.

Word spread of the F3 project from Ruby-Lee to her mother, Alena, and grandmother, Mandy, and with some encouragement from Ruby Lee, three generations of the family all began taking part in the weekly sessions.

However, it did not stop there, as word further spread to Ruby-Lee’s grandmother, Diane, who also began attending the sessions some fifty years since having last played football.

“It’s great to see so many women and girls coming along to our sessions and getting involved, but to have four generations of one family all in attendance, really is something special. It exemplifies that football is a game for all. A lot of the girls use our sessions as a springboard to go on and get stuck into grassroots football, with many following Ruby-Lee’s example and joining local sides. This is great for the sport as a whole.”

“I am really enjoying the sessions and am seeing improvements in both my fitness and health. Since starting F3, I have lost more than two and a half stone. “I am now also bringing my friends along to the sessions as well as my mum and gran.”

Diane, the eldest of the four generations, commented,

“it’s really nice to be getting active and playing sports again that I haven’t played for many years.“I’d say to anyone who is thinking of coming along, or to their grandparents, just come and enjoy yourselves.”

F3 has since been recognised on a national level with the project winning the FA Women’s Football Award for Best Participation Initiative.