Bristol City’s Youth Council are a group of young people taking practical action in their community in order to create positive social change that is of benefit to the wider community as well as to the youth council themselves. They have designed and delivered some brilliant projects addressing issues that are relevant to their community. They shine as individuals and as a group. They were instrumental in City’s holiday camp success and this year they have delivered 5 ground-breaking projects.  They really are the voice of their community and are constantly coming up with new community issues to overcome. 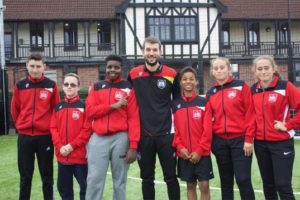 They were involved in the Bristol clean up, hosted a girls event which saw over 100 girls attended, developed and delivered an anti-poverty free football camp, a free disability holiday camp-over 50 in attendance, F3 girls session, Luke 5s League to combat Anti- Social Behaviour, developed a Mumball session, weekly youth disability session and recorded all of their achievements by writing a Social Impact report.

The programmes they have run have addressed a number of issues in society and in only a year have completely transformed perceptions, attitudes and behaviour.   There was a problem within the community, people didn’t have confidence, were subject to anti-social behaviour and didn’t feel they could afford activities or be would be heard within their own community.

Now people are able to access affordable sessions, which in turn is giving people greater confidence, which is leading to more people accessing education and qualifications and less people witnessing anti-social behaviour and substance misuse. The most important result is that for the first time young people are feeling As if their voices are being heard and they are actually making their community a better place.

They have won a number of awards already and have been invited to talk in front of hundreds of people. As well as all of the above they have all had their own journeys documented. They were all chosen or referred to the organisation for their own specific reasons.

This is Ben and Michael, the brains behind the LUKE 5s league

Ben has grown in confidence, Ben was constantly breaking into the football courts and being aggressive to staff. He was the brains behind the LUKE5s league. He and all the other Youth Council have volunteered their time at every single holiday camp. Giving up their own school holidays to help deliver the camps

Very introverted, was always around the courts, struggled socially. No grass space to play at home. Broke into facilities to play football. Constantly chased off. Met at a social inclusion session. Luke 5s was his idea with Ben, he is now the league admin and organiser.

Every Friday night young people aged between 14-16 turn up to play in a FREE football league.  This brilliant project, put in place to address anti-social behaviour. Which has lowered around the site by 90% compared to last year.

The youth council wrote a bid to get this funded, then went out and sourced sponsorship, which was based upon feedback from young people. “At this age appearance is everything, so we have a teenage fashion shop sponsoring the project, the winners get a load of clothes” says Ben. We also get further education organisations to come out and talk to them about options for their next stage in life.”

This week, 12-16 November 2018, is #iwillWeek which serves as a focal point for anyone and any organisations to communicate the benefits of youth social action. This year our focus is on young people. Their voices. Their impact. Their story.

#iwillWeek is a yearly celebration of the anniversary of the inception of the #iwill campaign. The #iwill campaign is a national initiative, led by Patron HRH The Prince of Wales, that launched in 2013 with high-level cross-party support. The campaign has a goal of enabling 10 to 20 year-olds from all backgrounds to have access to volunteering, campaigning and fundraising opportunities by 2020. We call this youth social action – making a difference through practical action in the service of others.

It is an independent cross-party campaign, led by 875 organisations from across sectors, of which we are proud to say we’re one. We believe that enabling more  young people, wherever they live and whatever their background, to become active citizens, will have a long-term, unifying impact on the future of our country.

Across our network of community organisations linked to the 72 EFL football clubs young people make a massive impact.  This week we’ll be celebrating some of the work that they do for their community.

Last weekend on the 100th anniversary of the end of the First World War, 7 young people from Yorkshire and Humberside represented their generation and helped the country remember at the National Remembrance Service in London.

END_OF_DOCUMENT_TOKEN_TO_BE_REPLACED

Last night the EFL Trust’s partnership with the University of South Wales (USW) received two awards at the Advance HE Awards, celebrating their contribution to the education sector.  The USW and EFL Trust Community Football Coaching and Development programme won The ‘Collaborative Award for Teaching Excellence’ and also a Spotlight Award for widening participation.

The Spotlight Award acknowledged the degree’s contribution to widening participation and social inclusion, by engaging individuals in otherwise hard to reach areas of the UK.  The unique reached is achieved through EFL Trust and its network of Football Club Community Organisations linked to EFL Football Clubs across the county.

The Community Football Coaching and Development degree has been designed in conjunction with the EFL Trust, in order to identify the type of skills and qualities that are required to work within professional football clubs community departments or national governing bodies, in areas of growth such as social inclusion, community coaching and football development. On this course, students learn about children and youth coaching, sports coaching, football development, social inclusion, sports management skills and the business relate

“This award is worthy recognition of the contribution all partners make to ensuring this course the success it is today. Towns and Cities across England and Wales are benefitting immensely from the 30,000+ hours that students are delivering within their local communities and in turn these students are enhancing their personal toolkit to make them highly employable. This award also recognises the innovative “flipped university” approach which we have developed over the past 5 years, allowing this course to be delivered through such an expansive network of partners, non of which would have been possible without the endorsement of the EFL Trust.”

“ It’s a well deserved accolade for USW and the staff in the Football Club Community Organisations that help first generation HE students start their careers in community coaching. The EFL Trust is proud to have supported the development of this unique and innovative programme.”

Advance HE came into being in March 2018, following the merger of the Equality Challenge Unit, the Higher Education Academy and the Leadership Foundation for Higher Education. Advance HE are focused on supporting the sectors desire to improve its own practice and create ‘safe places’ for the sector to address its challenges without the need for government intervention.’  USW and EFL Trust are delighted to have their work acknowledged in these, the inaugural Advance HE Awards

The EFL Trust and our network of EFL club charities are pleased to be part of One World an ambitious project by internationally acclaimed artist Mark Wallinger to commemorate the 100 years anniversary of the ending of World War One.

One World, is a new work co-commissioned by Liverpool Biennial and 14-18 NOW, the UK’s arts programme for the First World War centenary.

Inspired by the famous Christmas truce of 1914, when soldiers from both sides emerged from the trenches and met in No Man’s Land to exchange gifts and play football, Wallinger has taken the football itself as his canvas. He has transformed the football into a globe of the world, taking his inspiration from the celebrated image of the Earth taken during the Apollo 8 lunar orbit on 24 December 1968. Captured at the moment of earthrise, it is an image of enduring beauty, depicting a peaceful planet floating in the vastness of space.

In partnership with organisations including the EFL Trust, Sport England, the Football Foundation, Sport Northern Ireland and sportscotland, a limited edition of the One World football will be released in November to community football projects across the UK, with the simple request to each person to upload their own #OneWorld video in response to Wallinger’s call for action.

Football clubs throughout the country will be using the ball in a variety of projects. From their work with primary school children all the way through to ‘sporting memories’ session for those living with dementia, the balls will reach a wide range of people in communities across the country.

Mark Wallinger said: “It is 100 years since the Armistice was agreed in 1918, and 50 years since the Earthrise photograph was taken on Christmas Eve 1968. One World is my contribution to the legacy of those precious moments – spreading a message of peace for the world. Time to stop fighting and start playing. Playing the beautiful game. Let’s take that image of a precious and fragile world into the future and celebrate the joy of playing together.”

Mark Wallinger is one of the UK’s leading contemporary artists. Having previously been nominated for the Turner Prize in 1995, he won in 2007 for his installation State Britain. His work Ecce Homo (1999–2000) was the first piece to occupy the empty plinth in Trafalgar Square. He represented Britain at the Venice Biennale in 2001. Labyrinth (2013), a major and permanent commission for Art on the Underground, was created to celebrate 150 years of the London Underground. In 2018, the permanent work Writ in Water was realised for the National Trust to celebrate the Magna Carta at Runnymede, and The World Turned Upside Down will be unveiled in 2019 for the London School of Economics.

One World is co-commissioned by Liverpool Biennial and 14-18 NOW: WW1 Centenary Art Commissions, with support from the National Lottery through Arts Council England and the Heritage Lottery Fund, and from the Department for Digital, Culture, Media and Sport.

15 teenagers from South Yorkshire and Humberside were selected from thousands of applicants to take part in a special programme that will help them develop into leaders of the future. END_OF_DOCUMENT_TOKEN_TO_BE_REPLACED