Last weekend on the 100th anniversary of the end of the First World War, 7 young people from Yorkshire and Humberside represented their generation and helped the country remember at the National Remembrance Service in London. 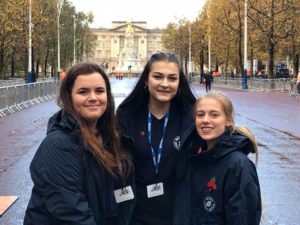 All 7 have taken part in National Citizen Service (NCS) via EFL Football Clubs.

This special opportunity came about due to their involvement in the National Citizen Service (NCS) delivered by EFL Trust. During the day, NCS graduates were part of the registration process, volunteering their time to welcome the 10,000 people took part in the procession through London. It was also the job of the NCS graduates to coordinate hundreds of wreaths which will then be laid by The Scouts.

The day was particularly special for Libby Smith (Doncaster) and Max Barnett (Grimsby) who attended the National Thanksgiving Service at Westminster Abbey in the evening which was also attended by members of the Royal Family. Both Libby and Max attended the Passchendaele 100 event in Belgium last year. 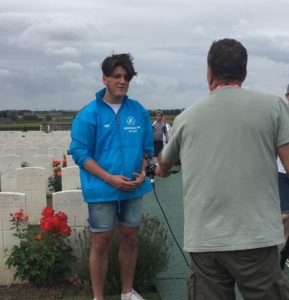 Prior to the Passchendaele 100 event, Max researched and discovered that his Great Great Grandmother’s Cousin, Ernest Cooper, fell at the 3rd Battle of Ypres.

Max said,
“When I found out that I had a relative I was really surprised and happy that I had a personal connection to the event. It really put it into perspective for me about how important it is to commemorate those who fought for us in the war!’’

Libby and Max are both are honoured to be invited to another high profile event, as EFL Trust and NCS representatives.

Libby Smith said,
“I feel very humbled to once again to attend and have a role in such a historic event.  Just like being part Passchendaele 100 last year this was such a memorable experience that I will never forget. I so so proud to be part of this event and represent the youth of today.”