News
You are here: Home1 / News2 / News3 / 4homepage4 / Wigan Athletic: Using the power of teamwork to help the vulnerable 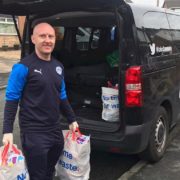 Whether it’s delivering PPE to 13 care homes, over 150 food packages to vulnerable people or making food drops to distribution centres, Wigan Athletic Community Trust have become a key part of their community’s response to COVID-19. However, Ian Gaskell, who has been coordinating Latic’s COVID 19 response, is keen to stress that the Community Trust’s work is part of a much wider team effort.

Gaskell says: “There are a lot of local organisations involved in the effort. What we decided when the enormity of the situation became clear is that we need to use our resources in the best way possible and that obviously means being part of a combined effort.”

The Community Trust works with a wide variety of partners on a weekly basis so, as Gaskell explains, finding out where they could help most effectively happened very quickly:

“We made lots of phone calls to our partners in particular Wigan Council, who are leading the response locally. However, we also spoke to foodbanks and homeless charities to see what they were doing and how we can best help them.

“As a result we are filling lots of gaps; things like picking up PPE from the council and delivering it to local care homes, or working with an armed forces charity to deliver food packages to vulnerable people.”

The other area where the Community Trust work is proving invaluable is their understanding and unique connection to the community.

Tom Flower, Wigan Athletic’s Head of Community, says: “We are a club, like many others around the country, which is right in the heart of our community. We engaged directly with close to 15,000 people last year. The nature of our work means most of these fall into the category of vulnerable.  Each of the people had average contact time of 24 hours, so we have an understanding of their needs.”

The Club and the Community Trust have been busy calling their supporters and participants to check on their wellbeing.

Gaskell describes how their knowledge of their participants has helped them prioritise the most vulnerable: “One of the first calls we made was to a gentleman on one of our programmes who we recognised as the kind of guy that would not want to ask for help, but we know he has a responsibility for caring for his grandchildren and the phone call quickly identified that he was struggling to put food on the table. We were able to make an emergency referral on his behalf and within 24 hours he’d received a food delivery.”

Latics have so far made 245 calls to the fans and participants. Gaskell explains how the calls help identify who might need help.

“We are calling them for a chat,” he adds. “The relationship we have with them allows this to be friendly and informal. However, we steer the conversation with a number questions and every caller has a sheet with the ‘tell-tale signs’ that might indicate someone might be having problems be that mental health, financial issues or being having no-one to get their shopping.  We log every call and flag up who needs a call back or referring to one of our partners for further help.”

“Our players have also been involved in the effort, Samy Morsy, Chey Dunkley, Kieffer Moore and Joe Gelhardt have also been sending personal video messages wishing young supporters a happy birthday. The manager also sent a birthday message via twitter to a supporter celebrating their 21st birthday. He has also been phoning supporters and sharing the hand washing and staying at home messages.”