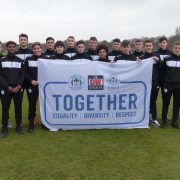 February is LGBT History month in the UK and EFL clubs across the country are showing their support.

The aim of Football v Homophobia is to make football safe and welcoming for everyone. They create opportunities and promote engagement of LGBT people in football at all levels and in all forms, improve representation and visibility throughout football and realise the potential of football in society as a tool to create positive change.

Louise, said: “We’re trying to make football a more inclusive place for lesbian, gay, bisexual and transgender people. We have seen a lot of positive changes over recent years, but we feel there is still some work to be done to make sure everyone feels welcome in football.

“We hope the players will take away with them a desire to be careful about the language they use, not to make assumptions about people or stereotype, to value each other as individuals and to really take that into their playing careers so that they’re role models for inclusion in the game.” Second year scholar Charlie Forecast, who attended the FvH workshop, believes raising awareness is vitally important for the future of the game.

He said: “The workshop was very insightful and a great idea. The biggest thing was making all of us aware of how big the campaign now is.

“The fact the campaign is so big tells us all that something needs to be done. If we can start from a young age accepting all people in football, it will benefit the game as a whole.”

This weekend, Wigan Athletic will be showing their support for the Football v Homophobia campaign when they host Preston North End at the DW Stadium. Wigan Pride will also be in attendance and the Latics’ first team players will be warming up in the FvH t-shirts.

Jonathan Jackson, Chief Executive of Wigan Athletic, who attended the FvH workshop on Wednesday added: “The Together programme is all about challenging discrimination and making staff aware that they should treat people equally and fairly. It’s about working together, thinking together and communicating together internally. We believe this is very important at this club.

“The event was fantastic and it’s great that Louise from Football v Homophobia visited Christopher Park to enhance the young players’ education, because it’s really important they better their understanding of the subject.”

To find out more about Football v Homophobia visit – http://www.footballvhomophobia.com/