News
You are here: Home1 / News2 / News3 / Inclusion4 / “It was an unforgettable, once in a lifetime experience” 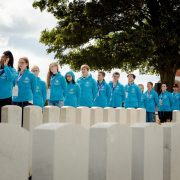 The event marked 100 years since the World War One ‘Battle of Passchendaele’, which led to an estimated 250,000 British and Commonwealth casualties. Our graduates involved were;

They were part of 100 NCS grads that were invited by the DCMS (Department of Culture, Media and Sport) to attend the UK ceremony of remembrance in Belgium on the 30th and 31st July. The event was attended by over 4,000 people which included members of the Royal Family, Prince Charles, the Duke and Duchess of Cambridge (William and Kate) and Prime Minister Theresa May.

NCS graduate Edward, had the honour of passing the wreath over to the country’s ambassador, whilst graudates Cheyenne and Sarah had the opportunity of meeting and greeting the Prime Minister and William and Kate.

Max from Grimsby and Libby from Doncaster, had exciting roles escorting descendants and forming a guard of honour for the Royal Family. They also had time in front of the camera and other media duties such as interviews live on BBC News and BBC Radio Sheffield. Max had his own family connection with the event after finding out that his Great, Great Grandma’s cousin, Earnest Cooper, died in the Battle of Passchendaele.

He said, “It’s been very warming to hear everyone’s story, I have my own story but it doesn’t compare to some of the people I have met.’”

Libby described her experience as unforgettable, “It was just an unforgettable once in a lifetime experience. It was so much better than I expected and I was unaware of how big the event really was, and how essential the role NCS graduates had to support the event.

“In my role over the weekend I was able to meet the royals and speak with the ministry of defence. We had the opportunity of visiting the front line and walking through no man’s land, which was spectacular. It’s something I will never forget.”

This fantastic experience was only available to NCS graduates. They were able to carry skills from their time on NCS and thereafter feel confident about representing their generation at such an important national event.

Michael Lynas, CEO of NCS Trust, said: “100 NCS graduates were honoured to serve our country at the Centenary of Passchendaele events. I am proud of how these young people represented their generation as they met descendants, the Royal Family and the Prime Minister.

“I know that these young NCS graduates will help ensure that the sacrifice of the fallen will be remembered for generations to come.”

To find out more about the National Citizen Service visit: https://www.ncsefltrust.co.uk

NCS: Bringing younger and older generations together
Scroll to top