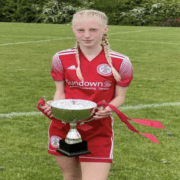 Freya was a young girl with a natural talent for football that was evident to everyone around her – but not to herself. When she first started playing, Freya was low in self-belief and was shy and reserved when participating in group sessions. However, after being part of the EFL Talent Inclusion Programme with Accrington Stanley Freya is a different girl, she has come out of her shell with an abundance of confidence.

The Talent Inclusion programme ensures that through existing community activities, talented female participants can be identified and referred to the FA England Women’s Talent Pathway.

Kerry Reeves from Accrington Stanley Community Trust states: “This programme has provided  an incredible opportunity for local girls who would not usually access the Women’s England Talent Pathways due to many barriers they may face. Thanks to the FA, we received a small grant to host a number of talent ID days for girls within Accrington, which has given them access and opportunity to progress.

Freya currently plays for Accrington Stanley and is a pupil at Hollins High School and in both settings, she strives to be the best version of herself. However, this has not always been the case.

She started her journey at Accrington Stanley through their Wildcats sessions where she was a shy, reserved member of the group with a depth of talent that she lacked confidence in.

But as she progressed to Accrington Stanley’s age group sides Freya began to develop a self-confidence that hadn’t been shown before with credit to the coaches for offering her reassurance when she needed it. Consequently, Freya not only possesses great footballing talent but is also a role model for those around her as she has the desire and commitment to constantly improve herself. Her effect has not only been on her teammates but her brother and sister who have followed in her footsteps in playing football.

Nicola Smith, Freya’s Mother, stated “The talent events held have been amazing. Freya has met new friends and her confidence is soaring after being referred to a FA Discover My Talent Event . Freya now has more confidence in her footballing abilities, and she is willing to continue working hard to achieve her dreams.”

Football and the opportunities provided through Accrington Stanley Community Trust and the Talent Inclusion Programme has seen Freya grow both on and off the pitch.

Tweets by @FL_Trust
Talent Inclusion Programme with Tranmere provides Grace with the desire to push...