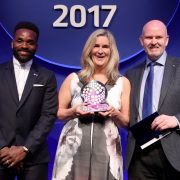 Portsmouth Football Club were crowned 2017 Checkatrade Community Club of The Year at the EFL Awards in London last night, for their fantastic community work.

Pompey were shortlisted for the award alongside Wigan Athletic, Burton Albion, Brighton & Hove Albion, Rotherham United and Fulham FC, after all six clubs were recognised for positive work in areas such as education, community engagement, health and inclusion.

Portsmouth’s Community Trust, ‘Pompey In The Community’ highlighted the potential benefits that can be gained when the club and community come together through the success of their showcase project – a crowd funding campaign which raised £100k to build a new hub facility. Doncaster Rover’s Andy Butler (centre) collects the PFA Player in the Community Award at the EFL awards at the London Hilton, Park Lane.