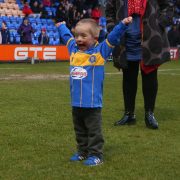 Shrewsbury Town in the Community’s Down Syndrome football sessions provide children and young people more opportunities to play sport in a comfortable and competitive environment.

Through the power of football and the Every Player Counts project, the scheme creates a multi-tier learning environment that improves the participants’ overall physical, social and emotional health.

While participants learn physical skills, they are simultaneously increasing their own social and emotional abilities.

Approximately 85 per cent of people with Down’s Syndrome attend mainstream school. Having the ability to train and play at a similar level increases their ability to reap all of the potential benefits.

One of the participants who attends the sessions every week, 5 year-old Evan White, has significantly progressed physically, technically and socially through the sessions.

His Dad Jamie said: ”We were contacted by Martin who’s one of the coaches, we knew him through the Shropshire Down Syndrome Association. He told us about the sessions and at that point Evan wasn’t really playing any football so we thought it would be good to introduce him to the game through these sessions at the football club.

”He’s really enjoyed the sessions and it’s been great for him to have the opportunity to play football with some children at the same age and ones that are older as well.”

Because of Evan’s exceptional efforts he was nominated and won the ‘Outstanding Effort in the Disability Programme’ award at Shrewsbury Town in the Community’s 21st Celebration Event. Evan’s Dad continued: ”This was a proud moment as I have watched Evan grow and to see him smartly dressed and come up and receive an award in front of 180 people was extremely impressive.

”The coaches have done a great job in getting him interested in football and his skills have really improved. I just hope he continues playing because he’s really enjoying it.”

DSActive Sports Officer Matt Maguire said: ”Shrewsbury Town are our 32nd football team that we have set up with community trusts in the country.

”It’s a good chance for participants to not only play football but to make new friends.”

This project is a part of Every Player Counts, a programme formed in September 2016 which supports the EFL Trust’s aim of increasing sports participation for all.

The landmark project was made possible thanks to a £1.1M donation from the Wembley National Stadium Trust (WNST).

To find out more about Every Player Counts visit – http://www.efltrust.com/projects/every-player-counts/

To find out more about Shrewsbury Town in the Community visit – http://www.stct.co.uk/