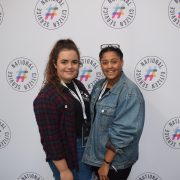 Cheyenne Van Den Berg from Sheffield, has been chosen from among thousands of young people to host this year’s NCS Trust National Conference.

Cheyenne, who completed NCS with EFL Trust will be co-hosting the Conference in front of a 1000 people at the ICC in Birmingham on Tuesday 12th December.

“Cheyenne is a great character and is perfect for the role at the conference. Since completing NCS, Cheyenne has continued her involvement by contributing many extra hours and working to improve her community.

“Her NCS journey and experience will have given her the confidence required to present in front of a 1000 people.”

Since starting her NCS journey in Summer 2016, Cheyenne has taken advantage of a number of opportunities.

Cheyenne is a key member of EFL Trust’s Regional Youth Board having joined in 2016. She was one of a hundred NCS grads that volunteered at the Passchendaele 100 event in Belgium. During her time there she had the honour of meeting Prime Minister Teresa May, and the Duke and Duchess of Cambridge.

Her role in her local community has been nothing short of inspirational, as she has planned and delivered 3 open mic nights that have helped support and raise awareness for mental health, immigration and Black History Month in Sheffield.

Cheyenne follows in the footsteps of fellow EFL Trust NCS Graduate, Katie Aris of Pompey in the Community, who last year led a Q&A with former Prime Minister David Cameron, Chair of the Board; Stephen Greene and CEO of NCS Trust, Michael Lynas.

We at EFL trust want to wish Cheyenne the best of luck for tomorrow at the NCS Conference.