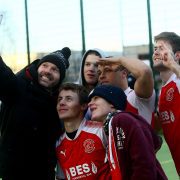 The EFL Trust’s nationwide disability football programme, Every Player Counts, celebrated its one-year anniversary by holding a football festival at MediaCityUk in Salford today, with players and Clubs showcasing the programme in front of special guests.

Former England defender Danny Mills, ex-Hull City manager Mike Phelan and Bolton Wanderers forward Aaron Wilbraham were all at the event to support the anniversary and witness first-hand the benefits of the scheme.

Mills, Phelan and Wilbraham met participants from Wigan Athletic, Fleetwood Town, Bolton Wanderers, Coventry City and Shrewsbury Town who have been involved in the programme over the past 12 months, with over 50 players taking part on the day. Funded by the Wembley National Stadium Trust and the EFL Trust, £1.1 million in grants, including almost £200,000 from the EFL Trust, has been donated to the Every Player Counts programme, with 25 EFL Clubs currently delivering the initiative across the country.

“Football is the greatest game on the planet, but it is about participation and that is what makes programmes such as this so beneficial. Not only the health aspect, but from a social point of view, today and over the previous year will have changed the lives of those taking part,” explained Former Manchester City defender Mills, who helped launch the Every Player Counts programme a year ago.

It has been a remarkable first year for the programme, with over 3,600 participants taking part, exceeding the initial target by over 20%. Just under 900 of those were between the ages of ten and fifteen, demonstrating the importance of giving youngsters an opportunity to gain confidence and take part in sporting activity. Mike Phelan watches on over a young Shrewsbury player.

The five EFL Community Trusts took part in a small tournament, with disabilities ranging from visual impairment to amputations, showcasing the diversity the programme offers.

Former Manchester United assistant manager Phelan said: “It is really pleasing to be able to see the opportunities available for everybody to take part in football. It is a fantastic programme that encourages participation, and with nationwide support from EFL Clubs it is only going to get stronger over the next few years.”

EFL Trust Director of Operations, Mike Evans said: “It’s a year since we launched the programme and it wouldn’t have been possible without the funding from the Wembley National Stadium Trust.

“Credit needs to be given to all participating EFL Clubs who have really pushed the boat out to engage as many people with disabilities as possible. It has been a fantastic effort from all involved. Danny Mills takes a selfie with the young Fleetwood players.

For more information on the Every Player Counts programme, visit: http://www.efltrust.com/projects/every-player-counts/