Brentford’s LGBT+ fan group ‘LGBeeT’s’ laced up their football boots with Brentford FC Community Sports Trust and Middlesex FA this week in a bid to raise awareness of LGBT+ equality in football.

The group took part in a unique football match at Middlesex FA’s new home at Rectory Park, Northolt. Along with four Brentford players, Brentford legend Kevin O’Connor attended the event and pledged his stalwart support for the match.

The match coincided with the Rainbow Laces campaign, which encourages fans and athletes to be ‘active allies’ and to play their part in ensuring LGBT+ people feel included in sport. Run by the LGBT+ charity Stonewall, the campaign is now in its fifth consecutive year, and has been credited with tackling discrimination both on and off the football pitch. 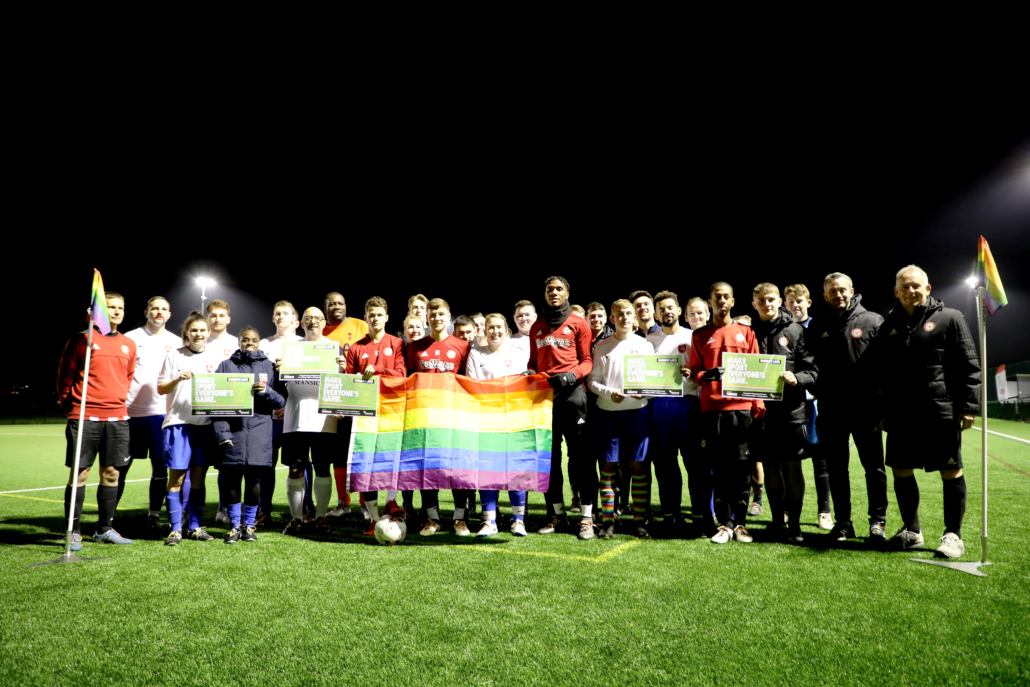 Brentford players Jonny Mitchell, Jarvis Edobar, Nicolaj Kirk and Joe Hardy, who all played in the match, joined B-Team Head Coach Kevin O’Connor at Rectory Park. Kevin, who made over 500 appearances for the championship club, felt it was important that Brentford endorsed the Rainbow Laces initiative. Kevin said

“Our message is clear: football is for everyone. We have to get the message out there and hopefully events like this will highlight Brentford’s commitment to the Rainbow Laces campaign.”

Brentford FC have already cultivated a reputation as a pioneering football club for LGBT+ rights. Back in 2017, Brentford players and officials watched a special screening of the short film WONDERKID, which highlights the problem of homophobia in football, focusing on a young footballer whose sexuality is threatening to alienate him from the game. Gemma Teale, who is the founding member of the LGBT+ fan group, believes such events have an important message for LGBT+ football fans. she said

“The annual Rainbow Laces campaign has been really important in raising awareness of LGBTphobia in sport – uniting people to become allies over the last few years. It’s great to see the Trust, Club and FA support the campaign with events like this and Brentford’s game against Sheffield– giving the message thatrentford FC and football as a whole is for everyone.”

“I am delighted that Brentford FC Community Sports Trust and Middlesex FA have joined forces for Stonewall’s Rainbow Laces campaign. Working together with Middlesex FA, Ealing Council are committed to making Rectory Park a footballing hub that is accessible and enjoyable for all. Community matches like this prove that very goal – making football a catalyst for social change.”