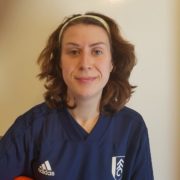 This week is Autism Awareness Week. We kick off the week with a great story from Fulham FC Foundation…

Hannah, who has Autism, has not only built up her self-esteem and confidence with Fulham FC Foundation but is also well on her way of achieving her dreams of becoming a fully qualified football coach.

The 28 year-old first started with Fulham FC Foundation as a volunteer just over six years ago. At the time, the Foundation was looking for volunteers to help on the Active Autism Programme. Despite having no prior experience working with children, and being nervous about the changes to her schedule, Hannah stepped up to take on the role.

She said: “When I first started to volunteer, of course I was scared and nervous at the same time, as I didn’t know how the children would be with having a new face around. After a few months I got used to it and so did the kids.”

Hannah became a regular, reliable face at Active Autism sessions, and after a few years of coaching, Hannah was given the opportunity to complete her Level 1 in Football Coaching.

Reflecting on the opportunity, Hannah commented: “When I got told that I was able to do the Level 1 in Football Coaching course I was over the moon, scared and nervous as I thought I wasn’t going to get through it and pass… but I did!”

Participants attending Hannah’s sessions have developed immensely in the time that she’s been coaching. The chance to take part in sessions that are tailored to their needs means a great deal to the participants, as well as the coaches.

For Hannah this became something very personal, helping her to develop her own skills as a coach and build her self-esteem and self-confidence.

She added: “Being involved with these sessions means so much to me, as they boost up my confidence, which I didn’t have much before.

“This also gives me a chance to achieve my dream to become a fully qualified football coach and work with kids with special needs.”

Ahead of the 2018/19 season, Hannah completed a Coach Assessment to become an Assistant Coach at the Foundation. Since September, she’s become a staple in delivering disability provision in SEN and mainstream schools, as well as supporting Pan Disability Football Hubs.

“Now that I have been given the chance to have my work increased, it is very exciting and somewhat scary at times,” she explained. “I work in a mainstream school as an assistant coach, but I’m used to working with children with additional needs.

“I believe that the more sessions I do, the more confident I will get. In the future, I would like to be able to proceed onto the Level 2 course and also be able to run my own sessions without any help, but that that will take time.”

Tweets by @FL_Trust
Burton Albion among those helping most vulnerable

The Most Important Message of the Season: Stay at Home
Scroll to top