The EFL, EFL Trust and all 72 EFL clubs demonstrated their collective influence on Tuesday 25 April by coming together to participate in the first ever EFL Community Day of Action.

Clubs across all three divisions showcased the significant positive affect they are having in their local communities 365 days a year, seven days a week, working with more than one million people in football-led community programmes and activities every season.

The Community Day of Action attracted widespread attention for the activity of EFL Club Trusts, who coordinated a variety of different projects across key areas of sport, education, health and wellbeing and community engagement.

The EFL Day Of Action hashtag ‘#EFLDayOfAction’ also trended on Twitter between 10am-8pm, with over 10 million impressions and a reach of 4 and a half million people.

QPR supporter James Casling’s inspiring story, featured on the BBC’s Victoria Derbyshire programme on Tuesday morning and set the tone for highlighting the life-changing impact that clubs can achieve. James attempted to take his own life on multiple occasions after his father committed suicide, but playing football for Rangers’ mental health team gave James renewed hope and enthusiasm for life.

Elsewhere, Sky Bet League Two side Doncaster Rovers held a community takeover day with health and well-being sessions, NCS and football sessions all taking place, while Checkatrade Community Club of the Year, Portsmouth, also ran numerous sessions for their local community including a ‘Wheels for All’ session. Defender Christian Burgess was in attendance and showed his support by participating in the event.

As the day progressed, Bristol Rovers Community Trust invited their Extra Time Club, who are over the age of 60, to join first team players and the club’s management for a physical activity session and quiz. At Sky Bet Championship club Wigan Athletic, pupils in year six at St Peter’s Hindley Primary School were given an exclusive tour of the club’s training centre before first team players Matt Gilks and Craig Morgan took part in a disability football session as part of the Every Player Counts programme.

Players and managers across the 72 clubs showed their support on the day, and EFL Trust Chairman John Nixon praised all the fantastic work that happens on a daily basis by clubs in their local communities.

He said: “Our clubs engage with people from all walks of life and the EFL Community Day of Action has been a fantastic effort,” said Nixon.

“Football inspires people to do activities they wouldn’t normally do and all 72 clubs work hard in areas such as health, inclusion, sport and education.

“Approximately £50million is being invested every season by the EFL Trust and Club Community Trusts into these key areas and the Community Day of Action has brought everything to life.” 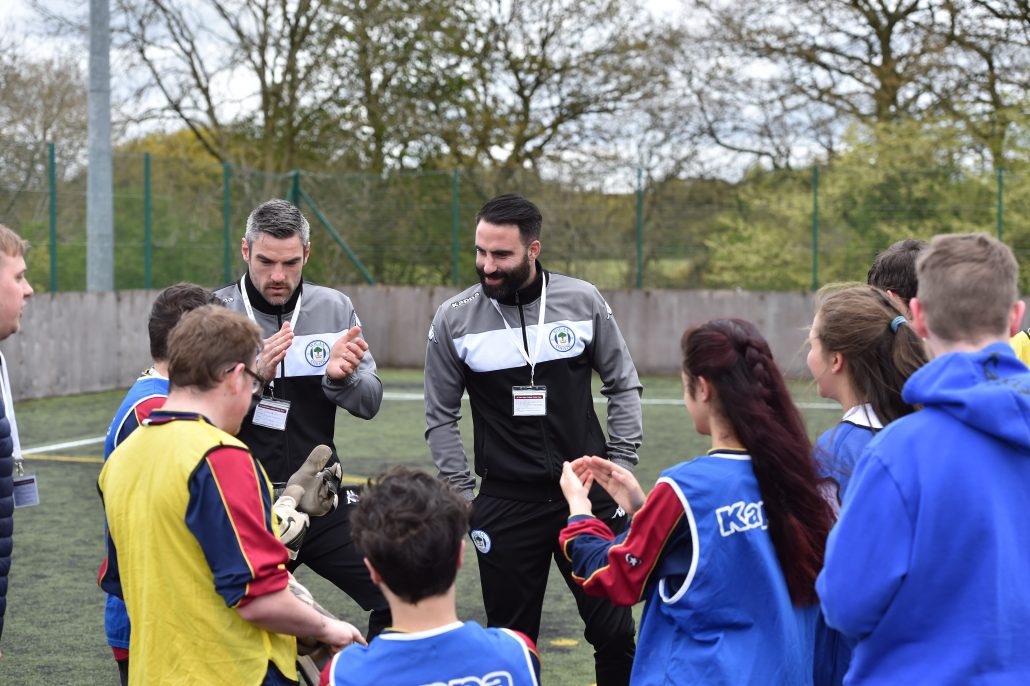 More than one million people are now participating in football-led community programmes and activities every season.

Today, all 72 EFL clubs will come together for the EFL’s Community Day of Action to highlight and showcase the impact of this work in towns and cities nationwide.

EFL Clubs use the power of football to have a positive effect on thousands of people’s lives in the UK every day, helping participants to improve their lives with programmes focused on health and wellbeing, education, community outreach and much more.

The EFL’s Community Day of Action presents a unique – and brand new – opportunity for all EFL clubs to simultaneously raise awareness of the impact they are having by creating a national platform to highlight the community work that happens across 72 towns and cities, 365 days a year, seven days a week.

Approximately £50million is being invested every season by the EFL Trust and Club Community Trusts into key areas, using the power of football to help people in need across sport, education, health and community engagement programmes.

The work is having a significant impact in communities up and down the country.

Shaun Harvey, EFL Chief Executive, said: “EFL clubs play a pivotal role in their communities and what our inaugural Day of Action makes abundantly clear is how this work is having a significant impact, not just on match days but seven days a week, 365 days a year.

“The power of football continues to be used to improve people’s health and wellbeing and provide increased opportunities to develop individuals’ education and career prospects.

“Such important work should be commended and clearly illustrates how EFL clubs and their Trusts are contributing to society outside of the game, achieving tangible results and lasting change.”

To find out more about the work and impact of EFL club community trust’s search the #EFLDayOFAction hashtag on Twitter.

16 young footballers representing Bristol City and Shrewsbury Town had a once-in-a-lifetime opportunity of playing on the Wembley turf as part of the Kinder+Sport EFL Girls Cup.

More than 6,000 girls have taken part in the six-a-side competition in 2017, that was organised on behalf of the EFL and EFL Trust, aiming to get children moving and promote active lifestyles.

Each of the 72 EFL clubs hosted a tournament for their local schools, with the winners earning the right to represent their club and wear their colour on the road to Wembley. The winning representatives were then split into Northern and Southern sections, with the two regional winners playing at Wembley before the Checkatrade Trophy Final on Sunday 2nd April 2017.

Encouraging children to be physically active and embrace the joy of moving, the Kinder+Sport programme is designed to promote active lifestyles through dynamic play and sports among children and their families, and has reached more than 4.1 million children in 25 countries to date.

Ferrero also partners with the EFL Trust to deliver the Kinder+Sport Futsal Cup for the under-16 age group, which also encourages children to get involved in sport and physical activity.

“For the first time in years it has allowed me to play a game I love and socially interact with people who are like minded. It has improved my social circle and I feel physically and mentally invigorated”.

EFL Trust’s Walking Football Cup returns for the third year running, with a record of 1500 men and women over the age of 50 taking part.

To kick off the competition this week, 6 regional finals will take place across the country, with the top 2 from each reaching the grand final. The grand finalists will play at the Bodymoor Heath Training Ground, home of Aston Villa’s first team.

The slow-paced version of the beautiful game, aimed specifically at the over 50’s, has grown enormously over the last few years with proven health and social benefits of its participants. A survey completed during last year’s competition showed that 82% of participants believe their physical health has improved by playing walking football, with 79% of those competing in last year’s competition saying their level of exercise has increased.

Paul Stephens from Leyton Orient, who suffered from depression, found a new lease of life in his passion for the game saying: ”It came along at the right time for me and I’m not sure where I would be if I hadn’t discovered it. It has benefited my life enormously.

”I was a typical kid. All I wanted to do was play for Arsenal since the age of six, but I stopped around 16 or 17. After that, I had flirtations with 5-a-side when the doctor said I should try to get into sport again.

”Depression is a big issue, what would make my year is if somebody suffering with depression got into walking football, I’d be really happy. If there is somebody like me sitting at home come on down, there are lots of genuine guys here who are appreciative of being given a second chance.” 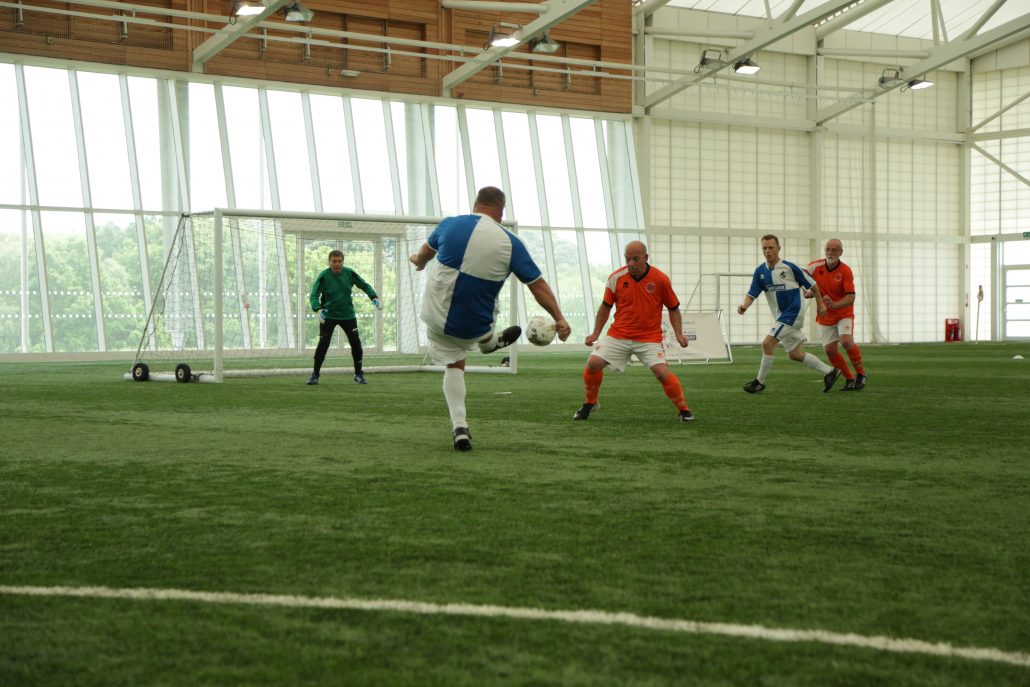 Nicol Meredith, from the EFL Trust commented: “Those dreams you have as a child of playing for your local team never truly go away, so the competition that teams represent in their local club and play in their colours. We want this tournament to provide the opportunity for friendly competition and to promote and help grow the game.

Nicol continues, “Walking Football Cup is a key event in the EFL Trust calendar and has so many benefits for the older demographic. We’re delighted that year on year the tournament grows with a 17% increase in teams from last year. Even better over 180 women will take part this year which is 100% more than we had competing in last years event.”

To find out more about walking football visit – www.efltrust.com/walkingfootball/

To keep up to date with the EFL Trust Walking Football Cup, follow our Twitter page @EFLTrust and use the hashtag #WalkingFootballCup

Portsmouth Football Club were crowned 2017 Checkatrade Community Club of The Year at the EFL Awards in London last night, for their fantastic community work.

Pompey were shortlisted for the award alongside Wigan Athletic, Burton Albion, Brighton & Hove Albion, Rotherham United and Fulham FC, after all six clubs were recognised for positive work in areas such as education, community engagement, health and inclusion.

Portsmouth’s Community Trust, ‘Pompey In The Community’ highlighted the potential benefits that can be gained when the club and community come together through the success of their showcase project – a crowd funding campaign which raised £100k to build a new hub facility. 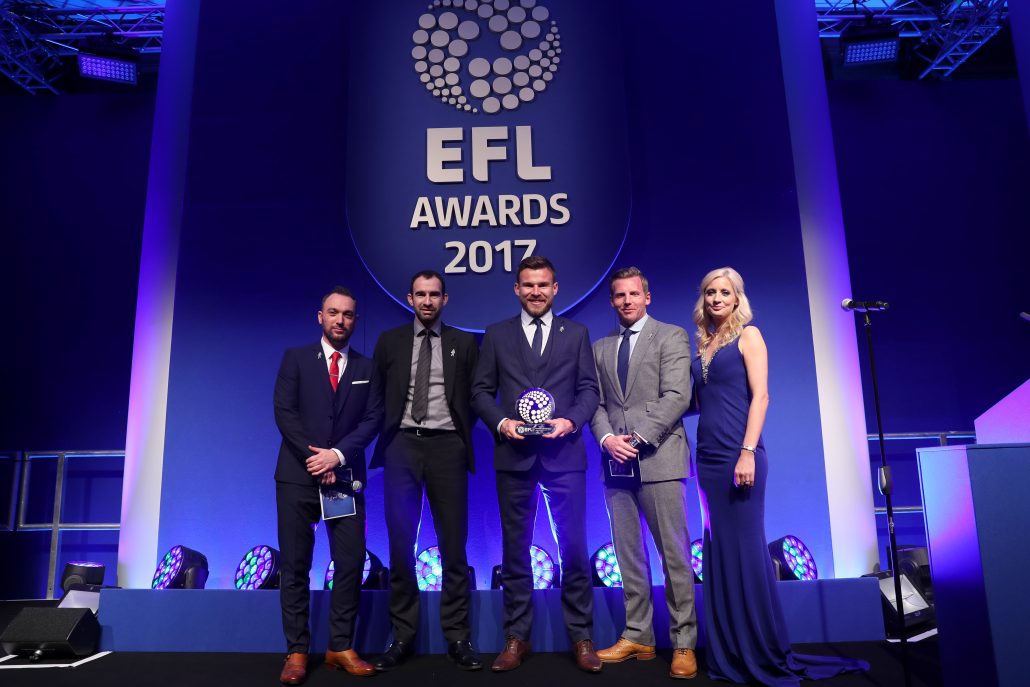 Doncaster Rover’s Andy Butler (centre) collects the PFA Player in the Community Award at the EFL awards at the London Hilton, Park Lane.

Hartlepool United and Mansfield Town were crowned champions of the girls and boys Kinder+Sport Futsal Cup last week, after an exciting grand final at Derby Arena.

Thousands of Year 10 and 11 students battled it out during the local competition part of the tournament to reach the regional finals stage, this took place over eight venues with the winners of the boys and girls tournaments qualifying for a place at the grand final.

Here’s some highlights of the day:

Futsal, the world’s fastest growing indoor sport, showcases close ball skills, increased touches, quick decision making, creativity and tactical nous. Some of the world’s leading football stars, such as Lionel Messi and Cristiano Ronaldo, honed their ball skills with futsal. The free flowing game has witnessed significant growth throughout England and Wales over recent years, as a sport in its own right, and as a fundamental part of football development.