Middlesbrough FC Foundation is celebrating royal recognition after being awarded the The Duke of York’s Community Initiative.

The Community Initiative is awarded annually to organisations seen to be making a very real difference in the communities they serve.

MFC Foundation, the independent charity arm of Middlesbrough Football Club, was among seven North Yorkshire community groups and a total of 34 organisations from across the United Kingdom presented the award by HRH The Duke of York, at a ceremony at the University of Huddersfield. 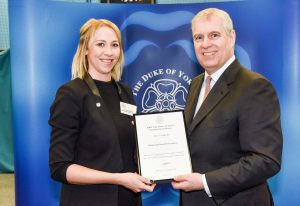 Head of Middlesborough FC Foundation Helena Bowman said: “MFC Foundation is delighted to have been awarded The Duke of York’s Community Initiative.

“To see our work receive a royal recognition of excellence is a massive boost for everyone involved with our organisation, and the award opens the door for a host of new and exciting opportunities.”

If you would like to find out more about the Duke of York’s Community Initiative please click here.

A video from Rotherham United Community Sports Trust, exhibiting the brilliant work they do in engaging individuals and inspiring the local community.

Thousands of women across London will be getting fit thanks to an exciting new project run by the capital’s EFL clubs and supported by the Mayor of London.

In an attempt to improve women’s health overall, the clubs will offer a range of fitness and exercise activities over a series of 12 week courses. The project will specifically target people who are currently inactive and those who struggle to exercise regularly, such as the over 40’s or those with a disability.

The seven clubs taking part are Charlton Athletic, Barnet, Brentford, AFC Wimbledon, Dagenham and Redbridge, Millwall and Leyton Orient. The project will be run by the club’s community trusts and a wide range of activities – in addition to football – such as badminton, rounders, Soccercise, dance and running will be on offer.

Nicol Meredith, Female Participation Officer with The EFL Trust comments, “Football clubs are at the heart of communities all across the capital so are ideally placed to get a wide range of people involved. Our Female Football Development programme has already got over 40,000 women and girls involved in sport over the past three years.   Thanks to funding from the Mayor of London we can now specifically target thousands of females that will benefit most from exercise and therefore make big difference and improve women’s health and well-being.”

A video from Shrewsbury Town in the Community showcasing some of the fantastic work they do on a day to day basis!

A powerful first-half effort from Anna Bebb was the difference in a closely-fought game, which eventually saw the Shrews, who were represented by Thomas Telford School, prevail.

Shrewsbury controlled proceedings in the first half and deservedly took the lead on six minutes when Bebb’s long-range strike found its way past Rebecca Marsh.

Sophie Bramford, impressive throughout, very nearly doubled the advantage before the interval but Marsh was alert to push the effort clear, before doing the same early in the second half.
Cambridge, represented by Bottisham Village College, had their best opportunity towards the end of the game when Amy McLean fired narrowly wide of the right-hand post.
However, Shrewsbury held on to secure a memorable victory under the Wembley arch.
Goalscorer Bebb said: “I’m excited to have scored the winning goal. All my family are here, our teachers have been really helpful and our aim was to make sure we enjoyed it and got an early goal.
“It’s something I will remember for the rest of my life.”
Bramford added: “It was great. We had a tour prior to the game which was enjoyable, it was fun to play at Wembley and we’ll go home happy tonight.”
Iain Sweeney, one of the teachers at Thomas Telford School, added: “I’m very proud of them, they have played four rounds of the competition to get here and they’ve battled hard. It’s a fantastic achievement.
“We told them to go out, enjoy it and try and get an early goal because 14 minutes will go in the blink of an eye. It was a team effort, they all did their bit.
“We came here two years ago and lost 1-0 in the final so to come here and win it this year it’s great. It’s been brilliant to have the backing of Shrewsbury Town and The Football League.”

The competition for girls aged under 13, organised by The Football League Trust, saw more than 6,200 girls take part in various group stages on the road to Wembley, with each of the 72 Football League clubs running their own tournaments for local schools, to determine who would represent them in the competition.

The Kinder+Sport Project is a national initiative from Ferrero UK and the Football League Trust, aiming to get children active and promote active lifestyles.

The initiative is made up of two elements. The + Sport Move and Learn Project is a schools-based programme targeting nine to 10-year-olds, which sets out to move more than 21,000 children and deliver over 190,000 hours of activity and education during the 2015/16 school year across the UK and Ireland. It is part of Ferrero’s global CSR activity which has reached 12 million children in 27 countries to date.

Ferrero also aims to get even more children active by sponsoring both the Kinder+Sport Kids Cup and the Kinder+Sport Girls Cup. The competitions encourage children to get involved with sport and physical activity whilst giving them a completely unique opportunity to play at football stadiums across the country. The Girls Cup also encourages young girls to participate in sport in an accessible and nurturing environment.