The National Citizen Service (NCS) programme delivered by the Football League Trust and partners brings together 15–17 year olds from different backgrounds in a packed programme of challenge, service and learning, enabling them to develop the confidence, skills and attitudes they need to become more engaged with their communities and to become active and responsible citizens.

NCS is keeping thousands of young people busy this summer with a three to four week programme, testing them in the first week with outdoor activities such as kayaking, ghyll ccrambling, rock climbing and many more.  The remaining weeks are spent engaging with the local community, learning new skills, and finally planning and delivering a community project that will leave a legacy in the local community.

Since the pilot year in 2011, the Football League Trust scheme has delivered more than 200,000 hours of community work that have benefited and made a positive impact on the local community.

Here’s what some young people that are away on NCS have said through social media.

NCS is delivered during autumn, spring and summer in which young people nationwide can sign up for this fantastic opportunity for just £50. If you want to say Yes to NCS then please contact The Football League Trust at [email protected] or visit www.ncsflt.co.uk. 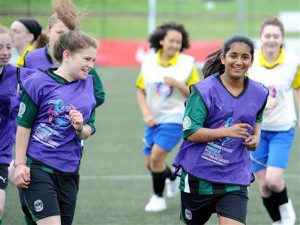 The festival will be held at Powerleague Wembley in the shadow of the national stadium ahead of the Women’s FA Cup Final between Chelsea and Notts County.

A number of the competing sides – including Brighton & Hove Albion, Preston North End and Brentford – are part of the Female Football Development (FFD) scheme which aims to increase participation among women and girls at the grassroots.

FFD is delivered by the Football League Trust and has helped thousands of people get into the game, strengthening the bond between the top level of the women’s game and the communities in which clubs are based.

The teams taking part in the competition are as follows:

The finals day, which took place at England’s training ground, played host to 10 finalists from nine Football League teams, who had qualified from the five regional heats.

This slow-paced version of the beautiful game is aimed specifically at the over-50s. As the name suggests, it is a non-contact sport and anyone that sprints, runs or jogs while the ball is in play is penalised.

In the competition, the teams were split into two groups of five with the top two qualifying for the semi-finals, and there was very little to choose between any of the teams.

Going into the final group games, Blackpool and Plymouth had already qualified from Group 2 but the outcome of their game would decide who topped the group. In the end nothing could separate the teams and Blackpool won the group on goal difference.

In Group 1, AFC Wimbledon scored a late winner against Derby B to keep their hopes alive.  This left Derby A needing a win against Leeds United in order to qualify, but they could only collect a 0-0 draw, in what was a pulsating end-to-end game  with a host of chances.

This meant the semi-final line-up was Plymouth versus Derby A and AFC Wimbledon versus Blackpool.

Both games were incredibly tight and won by a single goal, with Blackpool and Plymouth setting up a rematch in the final.

In that match there was nothing to choose between the teams in normal time and the game entered a tense period of extra time.

It was Argyle that broke the deadlock with a goal from Trevor Richards direct from a corner. However, that was not to be the end of the drama as there was almost a late twist, with the Seasiders forcing a fine save from the Plymouth keeper with the last kick of the match.

The final whistle sparked Argyle’s celebrations and confirmed that they had won the tournament – a remarkable achievement for a team who had only started playing the game eight weeks ago.

“It’s a very difficult game to play. If you over-hit or under-hit a pass you can’t catch the ball up because you aren’t allowed to run,” Plymouth goal scorer Richards said. “It’s great fun, and I would recommend it to anyone. You have got learn very quickly not to run.”

Dean Grice from The Football League Trust said: “Walking Football has grown massively over the last few years. The game is brilliant for over 50s and is designed to help people keep an active lifestyle despite their age, as well as getting those back playing football who had to stop due to injuries.

“The health benefits are immense, simply playing one hour a week for three months enables players to cover 30 miles and burn 4,200 calories.”

Following on from the success of Walking Football’s pilot year with The Football League Trust, there is a big momentum now to increase participation further and grow the game to every area of the country.

The Walking Football Cup has involved over 60 teams from throughout the country representing their local Football League club. We are now down to the last 10 teams who will take part in an exciting finals day at St George’s Park on Monday 6th July

Walking football is a slow-paced version of the beautiful game aimed specifically at the over 50s.

The competition is backed by football legend Jimmy Armfield, who said: “As you get older the opportunity to participate in team sports lessen – ironically at the age when you most need to keep active. Walking football is designed to help people keep an active lifestyle despite their age, as well as getting those back playing football who had to stop due to injuries. Simply playing one hour a week for three months enables players to cover 30 miles and burn 4,200 calories.”

The competition comprised of five regional events with over 60 teams competing, with the top two in each region qualifying for the finals. At the North West final Blackpool, spurred on by the presence of Jimmy Armfield, took the tittle with runners-up Crewe Alexandra joining them at the finals.

A hard fought South East final saw AFC Wimbledon win and qualify with Norwich. Home advantage proved key in the Midlands with both Derby A and B teams reaching the final and therefore qualifying. In the Yorkshire and North East region an incredibly tense final was decided by a Leeds United golden goal, however runners up York City will join them at St Georges where they’ll be looking for revenge.

The line-up was completed in the South West where Plymouth Argyle finished runners up to a very good Swindon Team.

One of the thousands of people who are feeling the benefits of walking football, Paul Jackson from Heanor, will be representing Derby County.

He said: “I played regular 11-a-side football on Saturdays and Sundays until I was 49. I then had some health issues and found doing any sort of exercise difficult but following a couple of successful operations last year I was able to start doing some physical exercise such as swimming and gym sessions but I really missed playing football.  So I was very pleased when I heard about walking football and for me this quickly became a replacement for gym sessions and a much more enjoyable one.”

Dean Grice, from the Football League Trust, said: “Those dreams you have as a child of playing for your local team never truly go away, so the competition that teams represent in their local club and play in their colours.  We are also grateful to The FA for allowing us to use St George’s Park to provide our players with the experience of playing a top class venue.”

Walking football has grown massively over the last few years and as the name suggests it is non-contact and anyone that sprints, runs or jogs while the ball is in play will be penalised with a free-kick awarded to the other team. The game is played on a pitch 20/40 yards in length and 15/30 yards in width.

Dean continues: “We want this tournament to provide the opportunity for friendly competition and to promote and help grow the game. So that more and more older people can benefit from staying active.”

How the final will work

The 10 teams have been split into two groups which will play a round robin tournament with the top two teams qualifying for the semi-final.