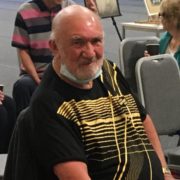 Foundation of Light’s ‘Wear Together’ programme has been a lifeline for Sunderland supporter Dave Davison.

During a tumultuous 18 months that saw communities cut-off from each other, the football club’s official charity focused its attention on reconnecting those who found themselves socially isolated.

Seventy-nine year-old Dave from Southwick was a regular at our walking football sessions and by his own admission just loved to ‘kick a ball about and have some craic with the lads’.

However, lockdown restrictions meant the weekly sessions could no longer take place and saw Dave stuck at home, missing the chance to catch up with the friends he’d made at the Beacon of Light.

Through a range of Zoom activities and telephone befriending calls, the team at the Foundation of Light reached out to older members of the community, in an effort to combat loneliness.

“It was a nice opportunity to catch up,” Dave said about the weekly Zoom calls. “I enjoyed the ones on a Friday particularly, as that was everyone chatting about the matches and all football related; I like to get my two penneth in!”

The Session calls were part of the EFL Trust’s Extra Time Hubs Programme. Funded with the support of Sport England’s Active Ageing fund from the National Lottery, Hubs have initially been created at 11 CCOs across the country. The Hubs are communities of like-minded people.  They include weekly gatherings, often at the football stadium, but also a varied combination of face to face and online groups and activities.

Find out more about the Hubs here.