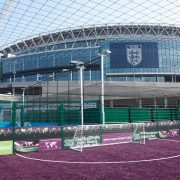 Ladies around the country are preparing for the Women over 30’s Festival as Wembley’s Powerleague this weekend!

This will be the first ever football tournament for women over 30, hosted by the EFL Trust, and funded through the Female Football Development (FFD) programme.

With a 346% increase in women’s participation in the first year of the FFD Programme, 500 women over the age of 30 are now playing football with EFL clubs. The boom in participation has meant the demand for competitive football has increased and this festival, taking place outside of Wembley Stadium  has presented a fantastic opportunity to do so.

There will be 8 teams taking part, representing 6 clubs;

All of the women taking part are over 30 years old, many of which missed the female football revolution, many of these women have never had the opportunity to play at this level before, with the oldest participant being 56! This programme has had countless benefits for the ladies, allowing them to socialise with other women similar to themselves, as well as get fit in a fun, and non-discriminatory environment.

“The FFD programme has come on leaps and bounds since it begun and has brought the benefits of sport to women and to girls who previously might not have considered playing football. The relaxed, social atmosphere has encouraged thousands of players back to the sport who previously left the game. The ladies find it extremely the sessions liberating so to now play in the first Over 30’s women’s festival at Wembley has presented them with an opportunity not to be missed!”

Former Millwall player, and FFD ambassador, Dionne Lennon is delighted to be making an appearance at Powerleague on the day and is looking forward to seeing the skills on display. She commented:

“The Female Football Development programme is brilliant and has really made an impact. The EFL Trust has done a fantastic job getting women back into playing football and attracting those who have never had the chance to play this great game. It’s a pleasure for me to have been asked by Millwall Community Trust to be their  FFD Ambassador and I am really looking forward to be attending the tournament on Sunday and any future inovlement to support and grow the women’s game even further.”

We would like to thank Sport England and the FA for funding this programme, as well as Lucozade Powerleague for providing their pitches on the day and working along side us to further enhance female football participation.