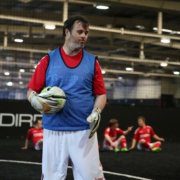 The Charlton Upbeats programme uses football to help aid and support young people with Down’s syndrome. The Upbeats have competed in a number of tournaments in the UK and abroad and are nine-times DS Active National champions.

100% of parents would recommend the Charlton Upbeats to any family with children with Down’s syndrome.

The project is focused not just on football, but is also about raising aspirations and improving relationships and social skills.

William Cottrell, one of over 170 young people registered with the Charlton Upbeats project, has been a member since it first started in 2008.

Since then, his sporting career has gone from strength to strength…and not just on the football field.

Thanks to the confidence William has developed with Upbeats, in 2009, he represented Great Britain in the Special Olympics Winter Games in Idaho, where he won a bronze medal in Skiing.

A decade later, he was one of eight British athletes to be selected to represent his country in golf at the 2019 Special World Summer Games in Abu Dhabi.

On March 20th 2019, to a roar of applause William stepped proudly onto the podium to receive his silver Special Olympics medal in golf.

His Mum, Elizabeth said: “It is a well well-earned prize, not only for the performance over the previous days’ competition but for the hours of practise, the refining of skill and the determination to always do his best.”