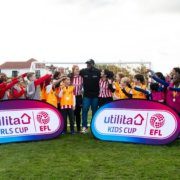 Over 20,000 children have taken part in the Utiltia Kids and Girls Cups this year, all with the dream of playing at Wembley. For 48 children that dream, one that only a select few professional footballers ever achieve, will come true over the next two weekends

Take a look at how our six remaining teams made the Utilita Kids Cup Final at Wembley Stadium!

The Blades overcame Preston North End in the Regional Final, drawing 1-1 before seeing off the Lilywhites in a tense penalty shoot-out. Meanwhile, the Hatters edged Millwall in a seven-goal thriller to make it to Wembley, running out 4-3 victors over the Lions.

In the League One Final, Portsmouth, represented by Meon Junior School, will take on Sheffield Wednesday, represented by Windmill Hill Primary School, for the winner’s medals.

The Owls earned their place in the Final, finding an extra gear in the second half of the regional Final against Crewe, scoring three goals. And Portsmouth secured passage to Wembley in style, vanquishing Charlton Athletic 7-3 in an emphatic win.

Tranmere needed spot-kicks to make it to the Final, eventually booking a date at Wembley after Harrogate Town hit the bar in the shoot-out in the Regional Final, whilst a slender 1-0 triumph over Bristol Rovers saw the Grecians through to the showpiece.

Tweets by @FL_Trust
The Power of The Badge: Stephen’s Story