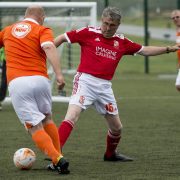 Over a thousand men from across the country have been competing for a place at the prestigious St Georges Park for the Walking Football National Finals next month. Providing participants with an opportunity to live out their dreams by representing their local team, the game is a brilliant way for the older generation to stay active. Growing year-on-year, 51 of the 72 clubs took part this year, making the competition tougher than ever.

Allowing the older generation to participate in a sport that they love. The slow-paced version of the game which is aimed specifically at the over 50’s, allows participants to cover 30 miles and burn 4,200 calories over a 3 month period, just by playing for 1 hour a week.

Every May and June, we run the Walking Football Cup, in which EFL Clubs hold a local competition through their community trust. The winners are then selected to represent their club at a regional level. The top 2 teams in each region then qualify for the finals. Last year, Plymouth took the winning title with a 2-1 win in the final against Blackpool. Walking football has been growing year-on-year, and with 56 of the 72 clubs taking part this year, the competition has been tougher than ever.

Commencing in Derby on Monday 9th May, teams representing Derby County, Burton Albion, Nottingham Forest, Mansfield Town, Walsall, Crewe Alexandra, Coventry City and Wolverhampton Wanderers all made the trip to the Moorways Sports Centre to take part in the Regional Finals of the competition. Mansfield Town were the overall winners, beating Nottingham Forest 1-0 in the the final. 14th May will saw the remaining 4 finals take place. With over 40 teams taking part throughout the day at Blackpool, Doncaster, Exeter and Luton. The national final takes place on 7th June.