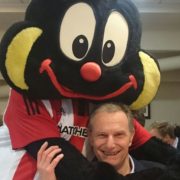 Brian Burgess a stalwart of Brentford FC Community Trust has been awarded the British Empire Medal for his services to football in the Queen’s Birthday Honours list. Brian, who has been involved with Brentford FC for decades, has been a Trustee for their Community Sports Trust for more than 15 years, helping to cement Brentford’s reputation as a community-led football club. He has been recognised for his voluntary service to football.

Speaking about the award, Brian said:

“I am delighted and humbled to be awarded this BEM, which recognises the valuable work of Brentford FC Community Sports Trust and its impact in local communities.

“It’s an absolute privilege to have served as a Trustee from the Trust’s inception in 2005 and to work closely with Chief Executive Lee Doyle and his team in developing such exciting projects such as the new community hub next to Brentford Community Stadium and the impressive sports hub at Gunnersbury Park.”

His passion for the Trust derives from a long-held belief that football and the local community should be fully integrated, which leads to enhanced social cohesion.

Speaking about the Trust, he said:

“As a charity, the Community Sports Trust delivers a wide range of programmes using the power of sport to educate, motivate and inspire people from all backgrounds including vulnerable and hard-to-reach groups. The way in which the team has successfully adapted these goals to the difficult circumstances of the pandemic has been truly amazing.

“Therefore, this award is a tribute to everyone involved in the Community Sports Trust and its partners, and the efforts of so many former colleagues and volunteers at the Club and Bees United.

“On a personal level, I owe so much to my late wife, Sylvia, who was and always will be an inspiration.”

Along with his pioneering community work, Brian has been actively involved with Brentford FC for most of his life, initially as a supporter. He was Chairman of Bees United, the Brentford Supporters’ Trust, when the fans completed a takeover of Brentford FC in early 2006, helping raise the funds required to refinance the Club.

Brian helped pave the way for the initial involvement of current owner Matthew Benham and served as Deputy Chairman until taking up a paid position on the new stadium project in 2008. Brian first started working in a voluntary capacity on the project to get Brentford FC a new stadium 2002, which came to fruition last month. He was on the Boards of Lionel Road Developments Ltd and Brentford FC (Lionel Road) Ltd until 2017.

“On behalf of everyone at Brentford FC Community Sports Trust, I congratulate Brian on being recognised for the work he has carried out so selflessly for the Club and Trust. This is a truly well-deserved honour.”

“Brian is a fantastic role model for sport supporters that want to make a positive difference to their club and its surrounding communities. It has been a remarkable journey and we are looking forward to a bright future.”