News
You are here: Home / News / News / 4homepage / Thousands of young people will join a National Youth programme through... 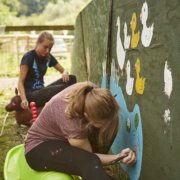 In 2020, the EFL Trust will double its network and reach to engage over 24,000 young people aged 16 and 17 each year through its network of Club Community Organisations (CCOs), delivering National Citizen Service (NCS), a 4 week programme funded by the Government.

The EFL Trust won the contract to deliver NCS from 2020 onwards more than doubling its delivery partners to 66 that will include 43 EFL CCOs, 11 Premier League Club CCOs and 12 youth organisations from across the country. NCS is one of the fastest growing youth programmes engaging 500,000 young people since piloting in 2009. The NCS experience will give young people a clearer idea of what they want from their future. They will take on fresh challenges, get a taste of independence and be given a platform to have their voices heard and deliver a social action project that will positively impact their local area.

The EFL Trust has have been involved in NCS since the pilot stages in 2011 engaging with over 60,000 young people during that time. Over 1.8 million hours of voluntary work has been delivered addressing local and national issues which young people are passionate about such as mental health, the environment and plastic waste.

Matthew Wimberley graduated NCS with Barnsley Football Club in 2019 and believes that the programme has change his life;

“I am a different person since doing NCS. It’s an impossible feeling to truly communicate without having experienced it first-hand but what I can say is you will feel fundamentally different in the best way possible. I’m closer to people I met on NCS after 4 weeks than people I’ve known for 4 years I now have all these amazing unforgettable memories that I’ll treasure for the rest of my life.

I spent my time on NCS challenging myself and doing things I really wasn’t comfortable doing, but couldn’t help being anything other than proud of myself afterwards.”

Parents and Guardians have recognised the impact NCS has had on young people. Lisa Murray, parent of NCS graduate from Pompey in the Community (Portsmouth FC) was amazed of the difference it has had on her daughter;

“The experience my daughter gained during the 4 week programme surpassed all our expectations and it was great to see her grow in confidence and social awareness throughout this period. This programme is a superb way to help modern children learn new skills, become more confident and understand the community they live in. I know this experience will remain with my daughter for the rest of her life.”

“The EFL Trust’s vision is to create a stronger, healthier more active communities and we see the delivery of NCS as a significant part of achieving this.

We are delighted to be able to grow our supply chain of Club Community Organisations and youth organisations involved in NCS and are proud of the impact we have had through NCS so far. Supporting thousands of young people as they transition into adulthood and then in turn make a positive difference in their community is something to be immensely proud of, and we look forward to continuing that in the future.”

“I’m incredibly proud of everything that NCS has achieved in the last ten years. As it moves into the next phase of its life, I’m confident NCS can make a more significant difference for our young people and their communities than ever before.”

Tweets by @FL_Trust
Brentford FC Deaf Football Coach is shortlisted for an award at the UK Coaching...