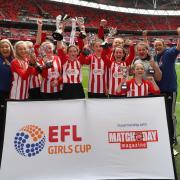 St Joseph’s Catholic Academy won the 2019 EFL Girls Cup on Sunday, with both themselves and Mangotsfield School putting in a performance to be proud of at the iconic Wembley Stadium.

In what was an excellent contest and a fitting end to this year’s competition, St Joseph’s – representing Checkatrade Trophy finalists Sunderland – won 3-1 against their opponents, who were representing Bristol Rovers.

Before kick-off, there was a special surprise in store, as England international Jordan Nobbs gave both teams a pre-match team talk and posed for photos.

The game itself was the perfect precursor to the Checkatrade Trophy Final, with fans of both Sunderland and Portsmouth getting behind the girls. Jess Harvey gave Mangotsfield School the lead with a superb finish, but another well-taken goal, this time from Sophie Greener for St Joseph’s, meant it was level at the break.

After the interval, Greener also claimed an assist, with a piece of individual brilliance seeing her set up Eve Parker to fire home. Parker then scored her second to seal the win and the trophy, going through on goal and slotting the ball into the bottom right-hand corner. Both sides received medals in the Royal Box after the game in recognition of their fantastic achievements in the 2018/19 Girls Cup, and St Joseph’s lifted the trophy to great applause around Wembley.

After the game, Greener said: “It feels amazing to say I’ve played at Wembley, and even better to say that I’ve scored. Meeting Jordan Nobbs before the game, someone who’s been here before, made us even more confident.”

Parker added: “Not many professional players get the chance to play at Wembley, so to play there at this age and score two goals is amazing. It feels like the whole journey has been worth it, it’s been amazing and it’s great to play with such talented girls.”

Alicia Berry, Assistant Curriculum Leader of PE at St Joseph’s Catholic Academy who was there on the day to support the girls said: “It’s hard to put into words how I’m feeling to be honest.

“I’m over the moon. It’s probably one of the proudest moments of my life to say that we have such talented girls and that they have had the opportunity to showcase their talents at a stage as big as Wembley. I’m so pleased for them.”

Everyone at the EFL Trust would like to congratulate both teams and thank them for their part in what was a memorable day for those involved.

Tweets by @FL_Trust
Dec’s story: ”If you really want something and work hard, you can...