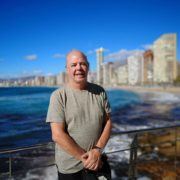 As part of National Fitness Day, we’re celebrating the achievements of FIT BLACK CAT Keith Chow and how AFC Sunderland’s Foundation of Light health helped him turn his life around!

Small changes he has made to his diet and lifestyle have made a big impact on his journey and helped him live a healthier and happier life.

Keith, 65, first joined the programme, which is funded by Sport England through the National Lottery,  in March 2020 and has been a regular face at the Beacon of Light, not only making a positive change in his own life but helping to support others too.

Over the first 12 weeks Keith, who lives in Jarrow in South Tyneside, lost over a stone in weight but it was the other benefits of the programme that made a big difference to him, he says,

“I wanted to make a change in my lifestyle. I used to be a fit person but working in an office, I got into a routine of sitting at a table and not exercising as much. FIT BLACK CATS was ideal as I thought there would be other people the same as me which would encourage me. I also wanted professional support to help me make a sustained change. It was a great opportunity and it’s on my doorstep.

Keith has taken a lot out of the classroom-based sessions in particular, learning how to change his lifestyle and building his confidence. But it wasn’t just him who was learning and the programme was impacting,

“When I’ve come home after a session, my wife would ask me what I learnt that day and study the booklet with me. The two of us would then follow the same set of instructions and make small changes at home. So not only was I learning but my wife was as well. The biggest thing that sticks in my mind is that making a small change, can make a big difference. Rather than having two pieces of toast in the morning, just make one. Small percentage changes which have stuck and paid dividends. I lost a stone which I was over the moon with. I have started swimming and cycling again.”

He actively recruits new members to the programme and he is acting as a mentor to new members. To anyone thinking of joining or who needs support, Keith says it’s worth getting involved.

“It’s great as there are professional people there to help and support. It’s not about making a quick fix you’re learning not only how to get fit but also how to eat properly and make sustainable lifestyle changes. It’s so important to remember that you’re not on my own. It’s going with a group of people and trying to encourage each other.”

Catherine Watson, a FIT coach at the Foundation of Light, praised Keith for his positivity says,

“For me he embodies what FIT BLACK CATS is all about. He is enthusiastic, is always willing to try something new, and he motivates others. He just has such as passion and enthusiasm to look after himself and he is a pleasure to work with on the programme.”

FIT FANS is a national programme which has helped thousands of people, not just football fans, to achieve long-term improvements in weight loss, physical activity, diet and general well-being.

The main aims of the programme are to:

Tweets by @FL_Trust
Adrian Bradley: This is a tipping point for our nation’s health