News
You are here: Home1 / News2 / News3 / 4homepage4 / Simon “The football sessions at Tranmere have helped me deal with my a... 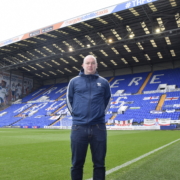 The power of football has always played a huge part in the life of Simon Ryecroft and has acted as a coping mechanism to deal with his depression and anxiety.

Simon, aged 40, is a regular participant at Tranmere Rovers in the Community’s Active Rovers Over 40s football sessions, and has benefited significantly, both mentally and physically, from participating in the weekly sessions at Prenton Park.

Speaking to raise awareness for World Mental Health Day 2020, Simon wanted to share his story of having a mental breakdown, and how Tranmere Rovers helped in his road to recovery.

“I hadn’t played football for a long time, but I saw on social media about the football sessions, but I went along to try, and I have never looked back. That is now over three years ago. Time has flown by. I had a breakdown and a depressive episode four years ago and I got diagnosed with PCSD, an anxiety disorder, depression and OCD.

“Mental health affects a lot of people and through my own experiences, I know a lot of men have troubles talking about it. “I was quite ill for a period of time, but I have always been quite open talking about my mental health. I realised it is something a lot of people have experienced but don’t always feel comfortable talking about it. “I was surprised how many lads I know and in football in particular, you wouldn’t have thought had any issues with mental health. I had a few conversations because I opened the subject with people and they shared their issues too. Gradually over the last few years, it is becoming a subject lads are finding it easier to talk about.

“We now see famous footballers and boxers talking about their experiences and making their mental health problems public. I think sharing helps.”

Simon, who has always had a keen interest in football since an early age, admitted he is not the only one who has used football as a way to cope.

He continued: “The football sessions at Tranmere have helped me deal with my anxiety. I know a lot of lads have said it is the only time they feel like they have not got problems is when they play football.

“The people at Tranmere Rovers Football Club are extremely friendly and the emphasis was having a good time. I have got my fitness back up and I have met some very positive people. “I was very low on motivation and depressed, I wasn’t doing much in my life general. Football has always been there in my life and by joining the sessions at Tranmere, it gave me confidence again. It has been massive for me. It has given me routine and something to look forward to each and every week. I feel happy and it has given me a buzz when I head home.

“It is difficult when you are in that place and depressed. It is not a nice place when you don’t have the motivation to go out and it is hard to make that first step. Once you have done the first step, you feel so much better. Tranmere Rovers is such a welcoming football club and when new lads turn up, the others make them feel right at home.”

Mental health is just as important as physical – there should be no shame...
Scroll to top