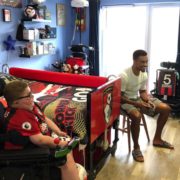 Young Bournemouth fan Adam Sevenoakes got a huge lift after a long period of shielding when his hero, Cherries winger Junior Stanislas, popped round for a game of FIFA.   Adam, who is also a player for AFC Bournemouth Warriors, the club’s powerchair team, had been shielding at home between March and the end of July.

Once shielding was over he welcomed Stanislas round for a long-awaited FIFA rematch. As Adam explains this isn’t the first time they have played and the pair’s rivalry goes back a couple of years:

“I was at Julia’s House (the local hospice) when the players came in around Christmas, and there was a game between me and Junior against another person and Ryan Fraser.”

Since then the pair have stayed in touch as Adam explains,

“I message him quite a lot on my dad’s Instagram, during lockdown I’d say well done if he had a good game, then he asked: ‘Can we have a rematch?’” 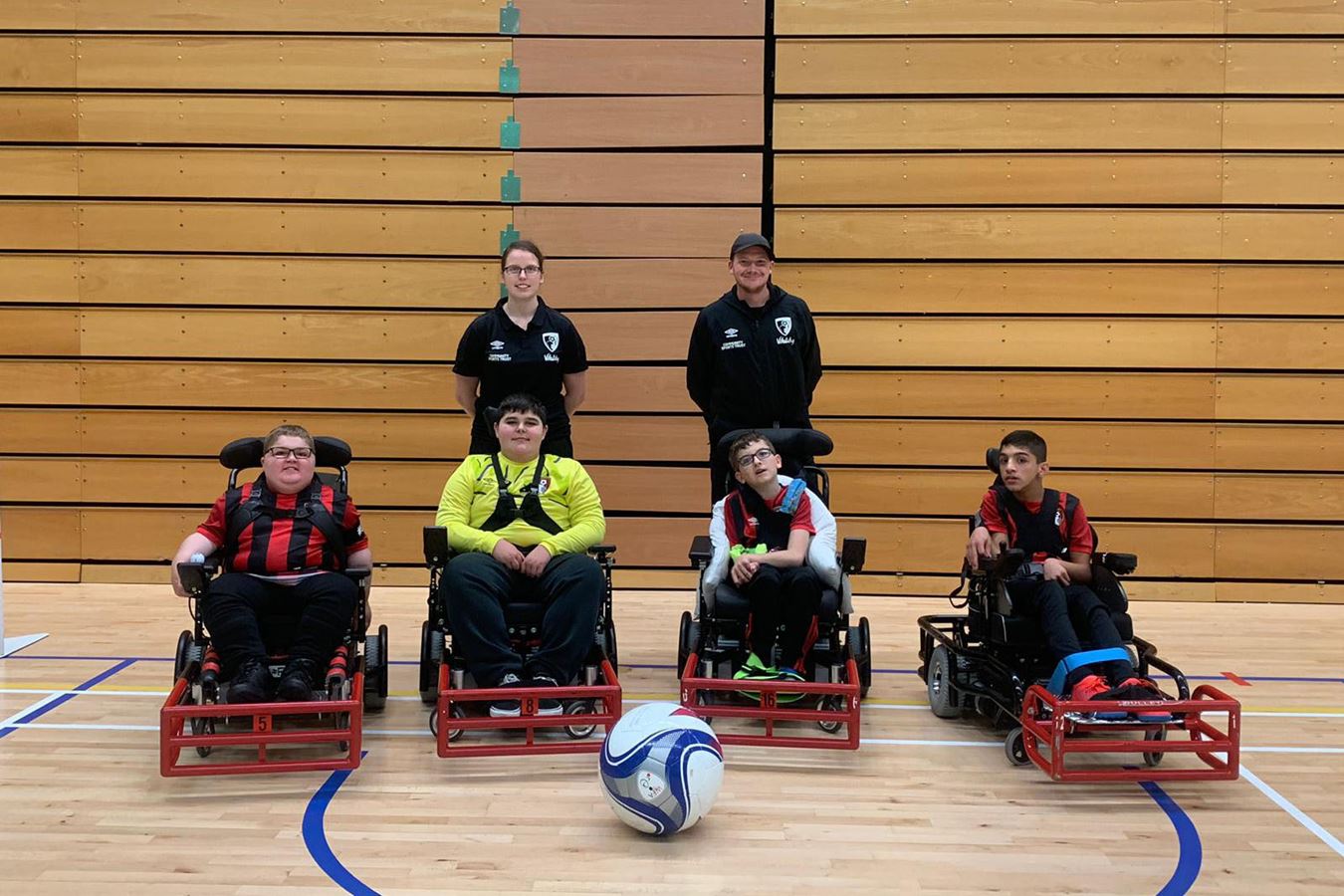 Adam didn’t think it was possible as they were on different platforms so they couldn’t play an online game. However, Stanislas was undeterred and made the offer to come over once Adam was out of shielding.  To which Adam says

“I answered that quite quickly!”

The promise of the FIFA battle provided something positive to look forward to during a long period of shielding for the 14-year-old, Adam says,

“Shielding has been a bit difficult and a bit annoying, we’ve been doing it since March and at some points shielding was a real struggle but when Stanno said he was coming it was something to look forward to, ”

True to his word once shielding was over Stanislas, arranged to visit. Adam says “It was quite surreal really” although like most teenagers Adam, had a job to do before the visit. “We cleaned my bedroom first, that was mum’s job!” 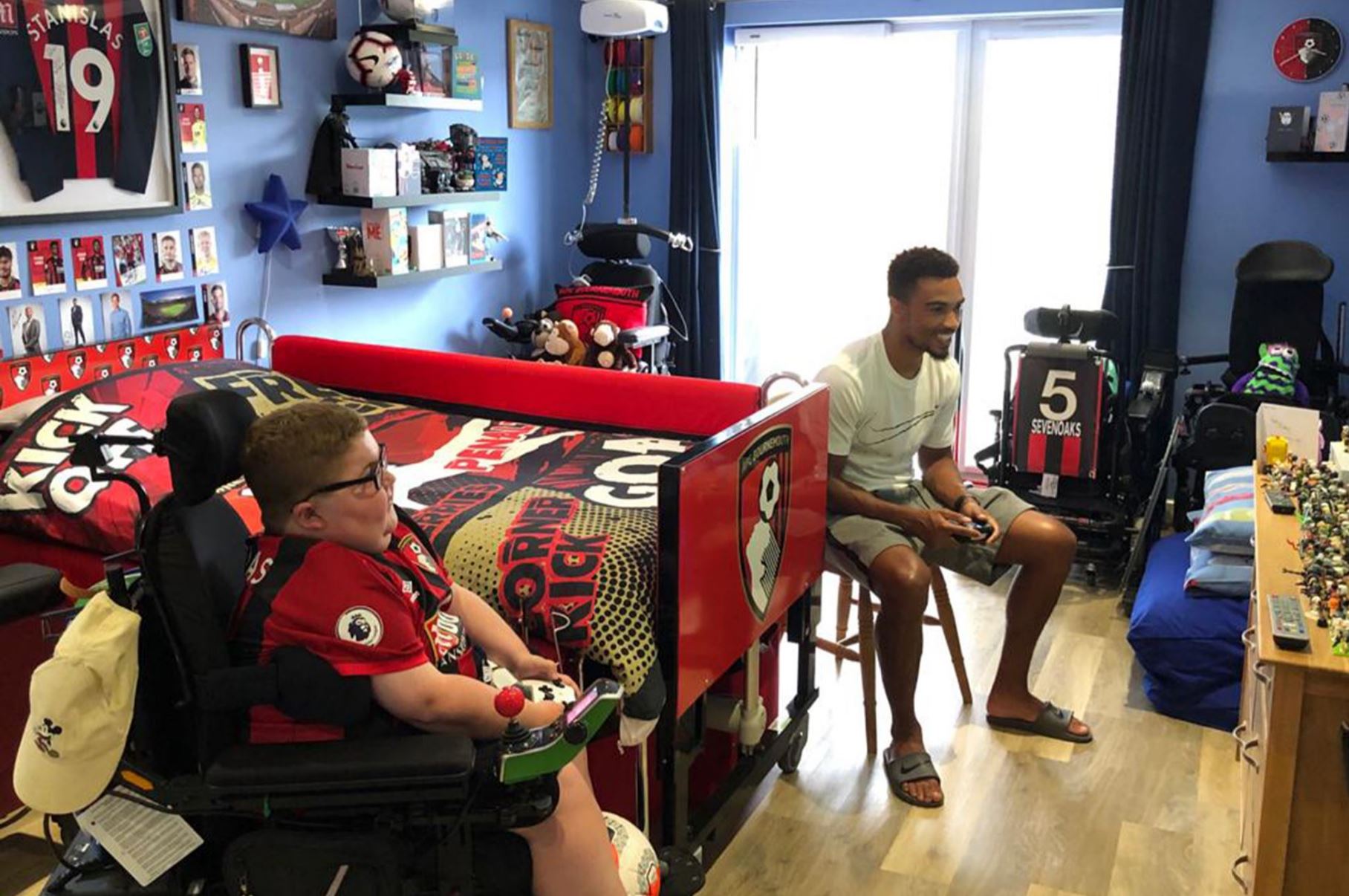 With the bedroom tidy – which as you can see from the photo, is of course in the Cherries red and black, the stage was set for the rematch, and across three fixtures it turned into a nail-biting affair, as Adam explains

“In the first game we were both Bournemouth and Stanno won 4-0, I picked him in my team, and he picked himself too,” said Adam of his slow start.

“Then I won the second game 3-1, I was the Soccer Aid team and Stanno was an Argentinian team. In the last game it was Manchester United against Chelsea, it was 1-1 but luckily I won 3-2 on penalties. That meant I won two and he won one, so I won! He’s already suggested that we have another rematch soon, it’s a friendly rivalry we have now.”

Ever-positive Adam hopes to return to Vitality Stadium in the new season.

“I hope we’re able to get back to the stadium soon, it’s my second home. It will be a bit odd, but the atmosphere won’t have changed I think.

Lisa’s Story: “It helped me gain confidence in myself and stop feeling...
Scroll to top
This website uses cookies to improve your experience by allowing the website to recognise you on subsequent visits and make navigation quicker,. We do not collect any personal data or share data with third parties. Press accept to opt-in to use of cookies on this site.Accept Reject Read More
Privacy & Cookies Policy