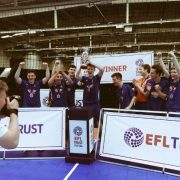 The National Finals continued last week, and it was the turn of the boys from League 2 as all 16 teams journeyed to the International Futsal Arena in Birmingham.

The teams were split in to four groups of four teams, each team playing three matches with the top two teams qualifying for the knockout stages.

In Group A Southampton toped the group and were unbeaten with 9 points, in second place were Norwich with 6 points while Bradford City and Huddersfield Town finished the group with 3 and 0 points respectively.

In Group B Grimsby Town were also unbeaten finishing on 7 points after a draw earlier in the group, Shrewsbury finished second in a close group on 5 points with Brentford missing out by just 1 point finishing on 4 points ahead of Mansfield on 0 points.

In Group D Scunny topped the group with 9 points while Plymouth Argyle made it through on 4 points, beating Cardiff City who finished on 3 points and Newport County on 1 point to complete the group stage.

The Quarter Finals started with Southampton v Shrewsbury Town, in a tight match the Shrews came through victorious while in the second Quarter Final Reading beat Plymouth Argyle to book their spot.

The Iron kept up their unbeaten streak for the day beating Notts County, while in the closest match of the knockout stages and The Canaries went all the way to penalties, the Mariners coming through in sudden death. 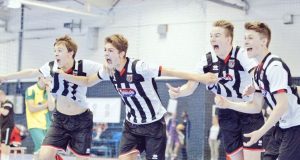 On to the Semi Finals and Scunthorpe were again dominant in the North East clash beating Grimsby to book their place in the final while it was Shrewsbury Town who made it through in the other Semi beating Reading.

On to the Final and a first for Shrewsbury, the match was a fast paced affair with both teams attacking from the start but it was Scunny who gained an early lead before seeing the match out 5 – 2 to become Champions of the League 2 National Finals.