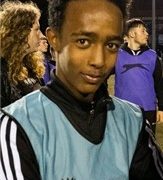 Simon aged 17 like many young people has a huge passion and love for the game of football, one that welcomes all and he first attended the Sheffield Wednesday Football Club Community Programme’s refugee session. Having recently moved to the county, he was keen to find and pursue activities and opportunities he could get involved with to integrate into the local community.

The refugee programme started in partnership with the Refugee Council whereby they organised and delivered free football sessions to refugees and asylum seekers. However, as the world was hit by COVID-19 and strict lockdown rules were implemented the programme grind to a halt. But, there were still 120 arrivals in the city being housed in a local hotel with very small quantities of the basic necessities required to live; money, clothes and the ability to have contact with friends and family. Not only did this impact their physical well-being but their mental health too.

This was their reality until SWFCCP partnered with Yorkshire Sport who helped fund COVID-safe activity sessions as well as providing equipment for people to continue exercising in their own time.

Having been involved in the refugee football sessions, Simon soon took up the opportunity to partake in the Premier League Kicks sessions where he was able to build further rapport and relationships with staff and other young people.

Not only did this benefit Simon’s football ability but also allowed him to build up his English skills and consequently his confidence. So much so, he has been able to apply and be accepted on the SWFCCP Education Post-16 programme completing a BTEC Sport Level 2 qualification.

Paul Hebda, Inclusion Officer said the following: “I have known Simon for around 2 years now, from working on the Refugee session and the PL Kicks sessions that Simon attended.

“From first attending, Simon was quiet, and he was not confident with his communication skills, with being new to the country and the sessions.” “Now Simon is attending our sessions with lots of confidence and has built some very strong friendships with other young people, and it is great to see him advance onto our Post-16 education programme.”

Simon explained: “I like [attending PL Kicks sessions] as I like the people and we have a lot of fun during the playing time. I like that the staff are giving their time for us to play for free. Everyone is nice to each other, and everyone comes to play football and get along with each other.”

Paul Hebda continued: “The Journey that Simon has come on so far is very positive, and Simon keeps on going from strength to strength, building his skills on a weekly basis.” “Simon would be a fantastic role model for other young people, and it would be great to see him involved in the PL Kicks programme for many years to come, and hopefully will move on to volunteering and helping out with the programme, which could open many doors and opportunities for him.”

Tweets by @FL_Trust
Badr sprinting to success hoping to inspire others

Degree programme with County in the Community developed Mo Jallow from a reserved...
Scroll to top
This website uses cookies to improve your experience by allowing the website to recognise you on subsequent visits and make navigation quicker,. We do not collect any personal data or share data with third parties. Press accept to opt-in to use of cookies on this site.Accept Reject Read More
Privacy & Cookies Policy