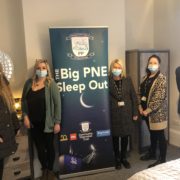 Preston North End hosted a Big Sleep Out in 2019 that fundraised a staggering £90,000 for the charity to proceed in renovating the house to become inhabitable.

The Foxton Centre launched the Housing First scheme to provide quality accommodation for the use of rough sleepers a number of years ago and it was ultimately funded by the Big PNE Sleep Out fundraising event at Deepdale two years ago.

The event, on Friday 15th November 2019, saw 300 people bed down for the night on the Deepdale concourse, under harsh wintery conditions, to show solidarity with the city’s homeless. Their support comfortably surpassing the initial £50,000 target.

The Big PNE Sleep Out was delivered by Preston North End Community and Education Trust in partnership with The Foxton Centre, Blog Preston and Biffa.

A property in Ashton-on-Ribble was purchased in October 2020 and renovations have been on-going for the last 14 months to convert it into two one-bedroom flats.

While work was affected and delayed in some cases by the changing landscape of the world in relation to the Coronavirus pandemic, all renovations have now been completed, allowing two tenants to move into each of the newly finished one-bedroom flats.

Chief Executive of The Foxton Centre Jeff Marsh said: “It doesn’t seem like two years since we all spent the night at Deepdale for the Sleep Out; what an amazing night it was. We smashed our fundraising target, almost doubling it.

“Since then, and despite the Covid pandemic, a house has been bought and totally renovated, and this week two tenants moved in. They are really excited, as is our team, and everyone involved can be rightly proud.

“The guys moving into the house have a fantastic opportunity. We get such amazing support from the community here in Preston and it’s great to be able to show everyone what has been achieved. Let’s hope for a better future for next year for everyone.”

Project Manager of the renovations, Ron Ashley, added: “Having spent a few months viewing several properties, the property with the right configuration and price was found in Ashton, with purchase completed in October 2020.

“Over the following months we had the plans drawn up and submitted to the local planning department, passing all the building regulation requirements to allow us to convert a normal three-bedroom terrace into two one-bedroom flats.

“This process has involved a variety of trades during the property transition. With the skill of all these people involved, we have now completed our journey to provide quality accommodation for two people, who have now been given the opportunity of moving into their own flats for Christmas 2021.

“From a personal point of view, it has been a privilege to have been involved with this project, having been associated with The Foxton Centre for over forty years. I would also like to say a big thank you to all the trades who have worked with me to complete this project, they have all given in their own way and it has been a pleasure.”

PNECET Chief Executive Tom Drake said: “We’re delighted that the Foxton Centre has been able to move two tenants into the house purchased as a result of the Big PNE Sleep Out.

“The house leaves a lasting legacy of the efforts of so many from the Sleep Out in 2019 and it’s fantastic to know that there are now service users of the Foxton Centre benefitting from the scheme.”

The renovation process has involved a number of generous local businesses, individuals and suppliers who donated their time and expertise in the transformation of the property, all of whom are listed below.

A signed and framed Louis Moult PNE shirt is also hung on the wall on entrance to the property, with the former North End striker having made an appearance on the night of the Sleep Out in 2019 and visited the Foxton Centre on several occasions during his time at Deepdale.

Tweets by @FL_Trust
FIT FANS will help you achieve your goals in 2022!