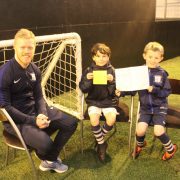 Horgan, alongside several other first-team players made an appearance at PNE’s February half-term soccer school to meet participants and sign all sorts of personalised memorabilia.

North End’s soccer schools are ran by the Preston North End Community and Education Trust and are hosted every school holiday where youngsters imitate their heroes on the pitch and meet them off it.

Daryl took time out from the meet and greet to face his toughest interview since arriving on British soil with young PNE fans Alfie and Luke who had been enjoying the soccer camp ran at the PNE Community Training Centre.

Armed with a camera and plenty of questions, the PNE duo quizzed Daryl on a variety of topics before handing the Irishman with a personalised card from the pair stating their gratitude for the interview.

Watch the hilarious interview between the trio here now: