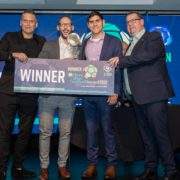 Northampton Town Community Trust have been announced as the winner of the prestigious #Morethanfootball Award for it work tackling loneliness.

The More than Football Award honours the best social initiatives in Europe delivered by a European Club, League, or FA by celebrating the work they do on and off-pitch on a local, national and international level.

Northampton Town’s winning project was part of the EFL Trust’s ‘Tackling Loneliness Together’ initiative which enabled EFL clubs to play an important and unique role in supporting their local communities when issues associated with loneliness were put into sharp focus at the heart of the COVID-19 pandemic.

With financial support from DCMS to initially drive the activities and additional funding and support from local partners, EFL Clubs created a range of locally delivered support services. From zoom cookery lessons for widowed men in Derby to Christmas Day phone calls in Wigan and Christmas dinner deliveries in Stoke, the project offered support to over 33,000 people – more than 75% of which were over 65 years old – and over 120,000 phone calls were made to those at risk of becoming isolated.

Northampton Town FC Community Trust alone supported 1,210 people aged over fifty to reduce the feeling of loneliness and improve their mental health and wellbeing. The impact of the project is wide reaching, and the stories Audrey and Michael outline just how the project has reduced feelings of loneliness and isolation, helped develop new friendships and improved people’s mental health and wellbeing.

Mike Evans, Chief Executive of the EFL Trust, said: “Football starts conversations, helping people to connect, and we are immensely proud Northampton Town Community Trust and indeed how our clubs put their communities first and providing vital support for those who were at risk of becoming lonely and suffering the effects of deteriorating mental health.”

The award was handed out during the 18th EFDN Conference in Budapest, Hungary, which assessed not only on the quality of the project but also on the level of promotion and engagement. The attending member clubs at the Conference, voted the Northampton Town Tackling Loneliness project as the best social initiative delivered by a European Club, League or FA.

Northampton Town Chairman Kelvin Thomas said “We are so, so proud. A huge well done to Phill Smith and all of the staff at the Northampton Town Community Trust as well as Scott Desborough and all of the Trustees for their work and the difference they make to so many lives. This project was a club wide effort, and I am so, so proud of everyone involved. We have always felt this club has fantastic community engagement but to see that work honoured on both a national and international scale makes us all exceptionally proud.”

Lee’s Story: “I honestly don’t know where I’d be without FIT FANS. It’s...
Scroll to top
This website uses cookies to improve your experience by allowing the website to recognise you on subsequent visits and make navigation quicker,. We do not collect any personal data or share data with third parties. Press accept to opt-in to use of cookies on this site.Accept Reject Read More
Privacy & Cookies Policy